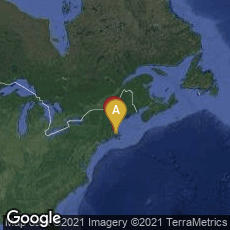 Proto-title page for the earliest of the two editions of Augustinus's Opuscula printed in Venice in 1491. From the Bayerische Staatsbibliothek.

In 1635 Rev. John Norton, a Puritan divine, brought to Plymouth, Massachusetts a copy of the Venice 1491 edition of St. Augustine's Opuscula. (ISTC No. ia01219000). Preserved in the Boston Public Library, it is the earliest documented 15th century book present in North America. A digital facsimile of the different copy of the same 1491 edition preserved at the Bayerische Staatsbibliothek is available at this link.

In 1491 no less than 4 editions of the same title were printed: 2 in Venice, 1 in Parma, and 1 in Strassburg. All four of these editions appear to have had large circulations as more than 100 copies of mody have survived. The Boston Public Library holds both 1491 Venice printings. The second is ia1222000. When I revised this entry in August 2019 I did not confirm which edition was previously owned by John Norton.