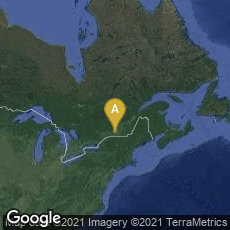 In 1949 Canadian psychologist Donald O. Hebb, then professor at McGill University, issued The Organization of Behavior. A Neuropsychological Theory. This work contained the first explicit statement of the physiological learning rule for synaptic modification that became known as the "Hebb synapse." His theory became known as Hebbian theory, Hebb's rule, Hebb's postulate, and cell assembly theory. Models which follow this theory are said to exhibit "Hebbian learning." As Hebb wrote in the book: "When an axon of cell A is near enough to excite cell B and repeatedly or persistently takes part in firing it, some growth process or metabolic change takes place in one or both cells such that A's efficiency, as one of the cells firing B, is increased."

"This is often paraphrased as 'Neurons that fire together wire together.' It is commonly referred to as Hebb's Law.

"The combination of neurons which could be grouped together as one processing unit, Hebb referred to as 'cell-assemblies'. And their combination of connections made up the ever-changing algorithm which dictated the brain's response to stimuli.

"Not only did Hebb's model for the working of the mind influence how psychologists understood the processing of stimuli within the mind but also it opened up the way for the creation of computational machines that mimicked the biological processes of a living nervous system. And while the dominant form of synaptic transmission in the nervous system was later found to be chemical, modern artificial neural networks are still based on the transmission of signals via electrical impulses that Hebbian theory was first designed around" (Wikipedia article on Hebbian theory, accessed 01-01-2014).