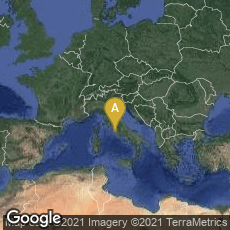 The Ostia Synagogue: the Oldest Synagogue in Europe Detail of a menorah relief on a column in the Ostia synagogue.

"An aedicula, to serve as a Torah Ark added in the 4th century CE. A donor inscription implies that it replaced an earlier wooden platform donated in the 2nd century CE, which itself had been replaced by a newer Ark donated by one Mindus Faustus in the 3rd century CE" (Wikipedia article Ostia Synagogue, accessed 01-04-2014).