Codex Zacynthius. The undertext  of this palimpsest is 7th-century majuscule of Luke 3:7-8 with commentary; the overtext is 13th-century minuscule of Matthew 26:39-51, part lection for Holy Thursday. 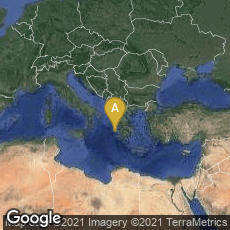 The Codex Zacynthius: The Oldest Codex with Text and Commentary in Uncial Script

The Codex Zacynthius, containing chapters 1:1-11:33 of the Gospel of Luke in Greek, was written in the sixth century, or possibly the seventh century, in an unknown location. The 176 leaf manuscript was palimpsested in the 12th of 13th century, and overwritten with weekday Gospel lessons. Its late Alexandrian text-type undertext, discovered as late as 1861, was written by two scribes in a single column in uncial script— a style very similar to that of the Rossano Gospels. The undertext is surrounded on three sides by a marginal commentary in a different, smaller uncial script; the codex is the oldest surviving manuscript incorporating this feature.

The early history of the codex is unknown. In its present sixteenth century Greek style goatskin binding it was presented to the British and Foreign Bible Society in 1821 by the General and abolitionist Colin Macaulay, as a gift from Prince Comuto of Zakynthos.

The undertext of the codex was discovered, deciphered, transcribed, and edited by English bible scholar and theologian Samuel Prideaux Tregelles, who published it in 1861 as Codex Zacynthius. Greek Palimpsest Fragments of the Gospel of Saint Luke, Obtained in the Island of Zante, by the Late General Colin Macaulay, and Now in the Library of the British and Foreign Bible Society. In his book Tregelles included one page of typographical facsimile showing the commentary in small type. He did not decipher the small Patristic writing, and doubted that it could be read without chemical restoration. For the main Greek text Tregelles used types originally cast for printing the Codex Alexandrinus, which only approximately represented the shape of the letters of the codex.

"The commentary is a catena of quotations of nine church fathers: Origen, Eusebius, Titus of Bostra, Basil, Isidore of Pelusium, Cyril of Alexandria, Sever from Antioch, Victor from Antioch, and Chrysostom. The commentary surrounds the single-column text of Luke on three sides. Patristic text is written in small uncial letters. Most of the quotations are those of Ciril of Alexandria (93 scholia); next comes Titus of Bostra (45 scholia). The commentary was written in a different kind of uncial script than the biblical text" (Wikipedia article on Codex Zacynthius, accessed 01-07-2014).

The Rossano Gospels, One of the Oldest Surviving Illuminated Manuscripts of the New Testament
The Codex Sinopensis or Sinope Gospels

The Septuagint May Have Been Produced in Alexandria
Ivan Fyodorov Issues First Complete Slavic Bible
Sir Robert Bruce Cotton Collects One of the Most Important Libraries Ever Assembled by an Englishman
Codex Ephaemi Rescriptus, an Early Fifth Century Palimpsest
The Codex Alexandrinus: One of the Earliest Bible Texts with Some of the Earliest Manuscript Illumination
Patrick McGurk Analyzes the "Architecture" of 138 Surviving Early Latin Gospel Books
Bibliographer Henry Bradshaw Rebuts Constantine Simonides' Claim that Simonides had Forged the Codex Sinaiticus