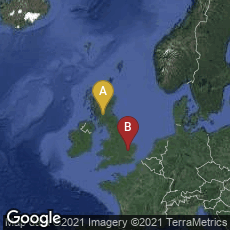 In February 1952 Scottish physicist William Cochran at the Cavendish Laboratory, Cambridge, and physicist and molecular biologist Francis Crick also at the Cavendish Laboratory, and Czech-English physical chemist and crystallographer Vladimir Vand of the University of Glasgow submitted their paper on the theory of helical diffraction to Acta Crystallographica. The paper represented “Crick’s full mathematical treatment . . . of the x-ray patterns produced by helical molecules generally” (Judson, The Eighth Day of Creation, 129). It provided the formulae for the Fourier transforms of a number of helical structures, and presented evidence that the structure of a synthetic polypeptide was based on the alpha helix of Pauling and Corey.

“It was, I believe, the first fairly conclusive experimental evidence for the existence of a helical structure at the molecular level. . . . The main value of this work, seen in retrospect, is that it was a first step on the road to the discovery of the structure of DNA by Jim Watson and Crick” (William Cochran, “This week’s citation classic,” Current Contents [May 18, 1987] 16).