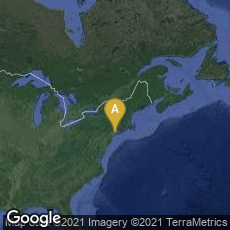 The Hershey–Chase experiment, often called the "Waring Blender experiment," was conducted in 1952 by American bacteriologist and geneticist Alfred D. Hershey and his research partner American geneticist Martha Chase at Cold Spring Harbor Laboratory, New York. The experiment showed that when bacteriophages, which are composed of DNA and protein, infect bacteria, their DNA enters the host bacterial cell, but most of their protein does not, confirming that DNA is the hereditary material.