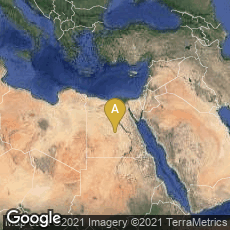 Medieval Islamic Views of the Cosmos: The Book of Curiosities World map from the Fatimid treatise, Book of Curiosities of the Sciences and Marvels for the Eyes; copy of manuscript originally written in the first half of the 11th century. Bodleian Library.

In 2002 the Bodleian Library at Oxford acquired one of the only known copies of an illustrated anonymous cosmography compiled in Egypt during the first half of the 11th century. This manuscript contains a series of early maps and astronomical diagrams, most of which are unparalleled in any other known Greek, Latin or Arabic material. The rhyming title of the volume, يKitāb Gharā’ib al-funūn wa-mulaḥ al-ʿuyūn, loosely translates as The Book of Curiosities of the Sciences and Marvels for the Eyes. The Bodleian's copy may have been made in the late 12th or early 13th century.

"Its unique maps and diagrams include: diagrams of star-groups and comets; a rectangular map of the world with a graphic scale (the earliest surviving example of such a map); a circular world map; individual maps of islands and ports in the eastern Mediterranean, including Sicily, Tinnis, Mahdia, Cyprus, and the Byzantine coasts of Asia Minor; maps illustrating the Mediterranean Sea as a whole, the Indian Ocean, and the Caspian Sea; and maps of five major rivers (the Nile, Indus, Oxus, Euphrates, and Tigris)" (http://www.bodleian.ox.ac.uk/news/2007_mar_29, accessed 01-23-2014).

"The volume (now given the shelfmark MS. Arab. c. 90) consists of 48 folios (96 pages), each measuring 324 x 245 mm. Pages without illustrations have 27 lines of text per page. The treatise begins with a dedication to an unnamed patron and an abbreviated table of contents. The manuscript copy is incomplete, however, for the copyist has omitted the eighth and ninth chapters of the second book, and the manuscript has lost part of the penultimate chapter and all of the last one.

"The lightly glossed, biscuit-brown paper is sturdy, rather soft, and relatively opaque. The paper has thick horizontal laid lines, slightly curved, and there are rib shadows, but no chain lines or watermarks are visible. The thickness of the paper varies between 0.17 and 0.20 mm and measures 3 on the Sharp Scale of Opaqueness; the laid lines are 6-7 wires/cm, with the space between lines less than the width of one line. The paper would appear to have been made using a grass mould. Paper of such construction was produced in Egypt and Greater Syria in the 12th and 13th centuries (greater precision is not possible). For similar Islamic papers, see Helen Loveday, Islamic Paper: A Study of the Ancient Craft (London, 2001); we thank the author for examining and discussing with us the paper in this particular manuscript.

"The author of The Book of Curiosities is not named and has not been identified, although he refers to another composition of his titled يal-Muḥītي(‘The Comprehensive’). On the basis of internal evidence, we can suggest that the treatise was composed in the first half of the 11th century, probably in Egypt. The copy we have today is more recent and appears to have been made some hundred and fifty to two hundred years later. Although the copy is undated and unsigned, the paper, inks, and pigments appear consistent with Egyptian-Syrian products made from the early 13th through the 14th century.ي

"Our author recognized the legitimate authority of the Fāṭimid imāms who came to power in Ifrīqiyah (modern Tunisia) in 909 and ruled at Cairo from 973 until their dynasty was brought to an end by Ṣalāḥ al-Dīn (Saladin) in 1171. At their heyday, the Fāṭimids ruled all over Syria, Egypt and North Africa. Whereas the ʿAbbāsid caliphs of Baghdad were recognized as the rightful leaders of the Muslim community by the Sunnī majority, the Fāṭimid imāms—who claimed to be the biological descendants of the Prophet Muḥammad through his daughter Fāṭimah—were recognized as legitimate by a faithful minority of Ismāʿīlī Muslims. Our author not only opens his work with an explicit acknowledgement of the Fāṭimids but also, further on, gives a brief but highly doctrinaire history of the rise of the dynasty, from the accession of the first imām, al-Mahdī, to the defeat of Abū Yazīd (al-dajjāl, the Antichrist) by his son, al-Qāʾim.ي

"The geographical focus of The Book of Curiosities is Muslim commercial centres of the 9th- to 11th-century eastern Mediterranean, such as Sicily, the textile-producing town of Tinnīs in the Nile Delta, and Mahdīyah in modern Tunisia. The author is equally acquainted with Byzantine-controlled areas of the Mediterranean, such as Cyprus, the Aegean Sea, and the southern coasts of Anatolia. The author’s occasional use of Coptic terms and Coptic months, together with the allegiance to the Fāṭimid caliphs based in Cairo, suggest Egypt as a likely place of production.ي

"The treatise was almost certainly composed before 1050. The tribal group of the Banū Qurrah are mentioned in chapter 6 of Book 2 as inhabiting the lowlands near Alexandria. As the Banū Qurrah are known to have been banished from the region of Alexandria by the Fāṭimid authorities in 1051–1052, it is very likely that this treatise was written before that date. Since Sicily is described as being under Muslim rule, the treatise could definitely not have been composed later than the Norman invasion of Sicily in 1070.ي

"The last dated event mentioned in the treatise is the construction buildings for merchants in the city of Tinnīs in 1014-1015. Moreover, al-Ḥākim bi-Amr Allāh, the Fāṭimid ruler of Egypt and Syria from 996 to 1021, is referred to in the chapter on Tinnīs as if he were no longer reigning. Therefore, the treatise was probably composed after 1021" (http://cosmos.bodley.ox.ac.uk/content.php/boc?expand=732, accessed 01-23-2014)