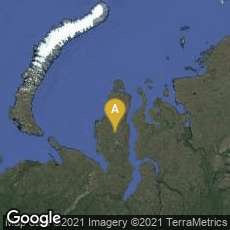 In May 2007 a Nenets reindeer breeder and hunter Yuri Khudi and his sons discovered a female woolly mammoth calf (Mammuthus primigenius) in the Arctic Yamal Peninsula of Siberia, Russia, washed out from the permafrost along the Yuribey River. This specimen, later named Lyuba after Khudi's wife, was 30-35 days old at the time of death. It weighed 50kg (110 lb) and is about the size of a large dog. Preserved in the Shemanovskiy Museum and Exhibition Center in Salekhard, Russia, it is by far the best preserved mammoth mummy.

"At the time of discovery, the calf was remarkably well-preserved; her eyes and trunk were intact and some fur remained on her body. Lyuba's organs and skin are in perfect condition.The mammoth was transferred to Jikei University School of Medicine in Japan for further study, including computer tomography scans. Lyuba is believed to have suffocated by inhaling mud as she struggled while bogged down in deep mud in the bed of a river which her herd was crossing. Following death, her body may have been colonized by lactic acid-producing bacteria, which "pickled" her, preserving the mammoth in a nearly pristine state. Her skin and organs are intact, and scientists were able to identify milk from her mother in her stomach, and fecal matter in her intestine. The fecal matter may have been eaten by Lyuba to promote development of the intestinal microbial assemblage necessary for digestion of vegetation.Lyuba appears to have been healthy at the time of her death. By examining Lyuba's teeth, researchers hope to gain insight into what caused Ice Age mammals, including the mammoths, to become extinct at the end of the Pleistocene era around 10,000 years ago" (Wikipedia article on Lyuba, accessed 01-25-2014).