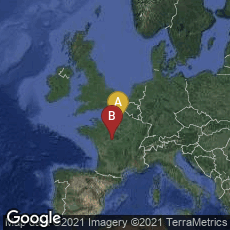 Title page of the Theodore Besterman copy of Marolles at the Getty Research Institute. The title page has a significant lacuna in the right margin and the copy appears to be significantly cropped.

In 1666 French churchman, translator, and print collector Michel de Marolles, abbé de Villeloin, published in Paris at the press of F. Leonard Catalogue de livres d’estampes et de figures en taille douce, the first book on print collecting. Marolles had his collection of 123,400 engravings "by more than 6,000 masters" bound into 400 large volumes (p. 15). He arranged the collection into schools, and in his preliminary and concluding essays he illuminated market conditions and the methods and tastes of fellow collectors. He also documented the relative weighting, in acquisition decisions, of physical condition, rarity, provenance, artist, engraver and the beauty of the image. Perhaps as a result of this book Louis XIV's finance minister, Jean-Baptiste Colbert, purchased Marolles' print collection for 26,000 livres, and it became the basis of the Cabinét des Estampes at the Bibliothèque royale (Bibliothèque nationale de France).

In his Discours en forme de préface (19pp.) Marolles described his project for a History of Painters (Histoire des peintures). Not having a family, he wrote that he put together this catalogue in case he would need to sell his collection. In his book Les Amateurs d'autrefois (1877) museum director, art historian and collector Louis Clément de Ris told of searching unsuccessfully for the terms of Marolles' deal with Colbert. Not finding any record, de Ris suspected that Marolles' may have sold the collection discretely, and that Colbert requested the catalogue.

Marolles distinguished "originals", i.e. those engraved by the master, from those engraved by others. He identified a substantial number of engravers, and he explained to other collectors how to arrange their collections into albums. He also listed the plates in many famous illustrated books subjects like cartography, architecture, travel.

In February 2015 it was my pleasure to acquire for my collection a copy of Marolles' work in a contemporary French red morocco binding. This book, which I bought from Jean-Baptiste de Proyart, was formerly in the library of the distinguished collector and connoiseur Hans (Jean) Fürstenberg.

In March 2015 a reproduction of an excellent engraved portrait of Marolles by Claude Mellan, and dated 1648, was available from the Art Gallery of New South Wales at this link.