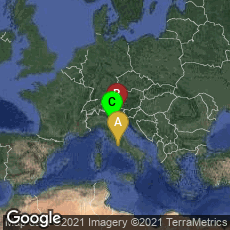 This and the following 4 images are from the Theodore Besterman copy in the Getty Research Institute.

The Bolognese artist Odoardo Fialetti, initially apprenticed to Giovanni Battista Cremonini, and after traveling to Rome, moved to Venice to work in the elderly Tintoretto's studio. From 1604 to 1612 he was listed as member of the Venetian painter's guild, the Fraglia dei Pittori. Fialetti was a proflific author of not only of paintings but also prints, portraits, books on drawing and ornament, and book illustrations on a very wide range of subjects, including anatomical treatises, especially those in Guido Cesare Casseri's (Casserio, Casserius) Tabulae anatomicae.

Probably the first printed manual on drawing the human body, as distinct from earlier manuals on anatomy for artists, was Fialetti's Il vero modo et ordine per dissegnar tvtte le parti et membra del corpo hvmano—an entirely etched book of 40 leaves, drawn and etched by Fialetti, published in Venice in 1608. Fialetti's book may also be the first printed book on drawing in general, and may also be the first printed book on drawing for which authorship is clear, as the undated printed drawing book associated with Agostino & Annibale Carracci, Scuola perfetta per imparare a disegnare tutto il corpo humano cavata dallo studio, e disegnari de Carracci, a work of engravings of drawing examples by the Carraccis and other artists, possibly including some from the Carraccis' Accademia degli Incamminati in Bologna, is thought to have been first printed between 1609 and 1614, but could also have been later.

In her 2009 thesis, Odoardo Fialetti (1573-c.1638): The Interrelation of Venetian Art and Anatomy, and his Importance in England (2 vols.),  the most comprehensive study of Fialetti's work of which I am aware, Laura M. Walters provides on pp. 68-79 a detailed analysis of Fialetti's drawing book and calls it on "the first drawing book of its kind of to come out of Venice." She describes two different states of the work, and compares it to other drawing books of the period, but does not cite any printed drawing book earlier than 1608. Comparing Fialetti's book to known studies by Agostino Carracci, she states that "the arrangement and development of body parts reflects the studies of Agostino Carracci, though the images and techniques used by Fialetti are not taken directly from him" (p. 70).