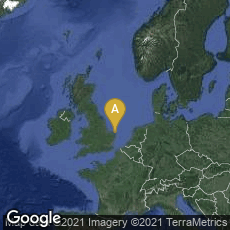 On February 7, 2014 scientists in England announced the discovery of 49 footprints made by at least five different individuals preserved in soft sedimentary rock on a beach in Happisburgh, Norfolk. The preserved footprints, believed to be around 900,000 years old, were the earliest found in Europe to date. The prints were discovered in deposits that previously revealed stone tools and fossilized bones dating from between 800,000 and one million years before the present.

The footprints were uncovered at low tide in May 2013 after stormy seas pushed away large amounts of sand from the beach. Scientists removed remaining sand and sponged off the sea water before taking 3D scans and images of the surface. In some cases they identified heel marks, foot arches and even toes from the prints. They found footprints equivalent to up to a UK shoe size eight. The scientists estimated that the individuals who left the prints ranged from around two feet eleven inches tall to five feet eight inches tall. At least two or three of the group were thought to be children, and one was possibly an adult male.

"Anthropologists and evolutionary biologists from around the UK have been studying the tracks, and believe they may have been related to an extinct form of human ancestor known as Homo antecessor, or 'Pioneer Man.'

"The tracks include up to five different prints, indicating a group of both adults and children walked across the ancient wet estuary silt.

"They are the earliest direct evidence of human ancestors in the area and may belong to some of the first ever Britons.

"Until now the oldest human remains to be found in Europe all come from around the far south of the continent, including stone tools found in southern Italy and a tooth found in Spain.

"Skull fragments from that are around 780,000 years old hominid – the term used by scientists for early humans – were also found in southern Spain" (http://www.telegraph.co.uk/science/science-news/10623660/900000-year-old-footprints-of-earliest-northern-Europeans-discovered.html, accessed 02-08-2014).