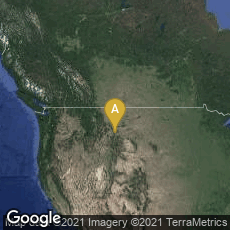 Image Source: en.wikipedia.org
A Clovis projectile point created using bifacial percussion flaking (that is, each face is flaked on both edges alternately with a percussor)

On February 13, 2014 a team of scientists headed by Morton Rasmussen, a postdoctoral fellow in genetics at Stanford University, published the genome of a child from the Clovis culture. The remains sequenced were discovered in 1969 at the Anzick Clovis site, a human burial site dated 11,000 to 10,700 years before present, near the town of Wilsall in southwestern Montana.

The genome sequence—the first completed of a prehistoric Native American— determined that the Anzick child was a boy, and that he, and Clovis people in general, were closely related genetically to Native American groups from Central and South America, but not to later migrations of Canadian and Arctic groups. The evidence supported the theory that the Americas were colonized in several waves of populations crossing the Bering Strait from Asia, and contradicted the Solutrean hypothesis, which suggests that Clovis people derived from Upper Paleolithic European migrations into the Americas. No connection to European Upper Paleolithic genetics was identified within the Anzick child's remains.

"Clovis, with its distinctive biface, blade and osseous technologies, is the oldest widespread archaeological complex defined in North America, dating from 11,100 to 10,700 C years before present (BP) (13,000 to 12,600 calendar years BP). Nearly 50 years of archaeological research point to the Clovis complex as having developed south of the North American ice sheets from an ancestral technology. However, both the origins and the genetic legacy of the people who manufactured Clovis tools remain under debate. It is generally believed that these people ultimately derived from Asia and were directly related to contemporary Native Americans. An alternative, Solutrean, hypothesis posits that the Clovis predecessors emigrated from southwestern Europe during the Last Glacial Maximum. Here we report the genome sequence of a male infant (Anzick-1) recovered from the Anzick burial site in western Montana. The human bones date to 10,705 ± 35C years BP (approximately 12,707–12,556 calendar years BP) and were directly associated with Clovis tools. We sequenced the genome to an average depth of 14.4× and show that the gene flow from the Siberian Upper Palaeolithic Mal’ta population into Native American ancestors is also shared by the Anzick-1 individual and thus happened before 12,600 years BP. We also show that the Anzick-1 individual is more closely related to all indigenous American populations than to any other group. Our data are compatible with the hypothesis that Anzick-1 belonged to a population directly ancestral to many contemporary Native Americans. Finally, we find evidence of a deep divergence in Native American populations that predates the Anzick-1 individual." (Abstract).