From the 1912 semi-facsimile English translation by Herbert Clark Hoover and Lou Henry Hoover. 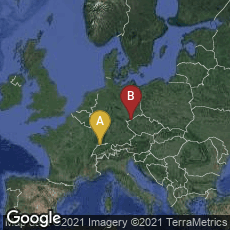 Georgius Agricola Issues De Re Metallica, the Most Famous Classic on Mining and Metallurgy The increased European demand for metals that came with the revival of trade in the late Middle Ages saw a corresponding growth in the European mining industry, which developed to an advanced state in the metal-rich regions of Saxony, Austria and Bohemia. In 1556 German physician, humanist and scholar Georg Bauer, better known under the Latin version of his name, Georgius Agricola, issued De re metallica from Basel at the press of Hieronymus Froben and Nicholas Episcopus (Bischoff). Agricola became interested in the theoretical and practical aspects of mining, metallurgy and geology after being appointed town doctor of Joachimsthal (now Jáchymov), a silver-mining community on the east side of the Erzgebirge mountains (Ore Mountains) in what is now the Czech Republic. He published his first work on mining, Bermannus sive de re metallica dialogus, in 1530. This dialogue, which has been called "the first attempt to reduce to scientific order the knowledge won by practical work," contained an approving letter from Erasmus at the beginning of the book. Sixteen years later, in 1546, Agricola issued a collection of five treatises on geology and metallurgy, including the first work on physical geology (De ortu et causis subterraneorum); the first systematic mineralogy (De natura fossilium); a work on subterranean waters and gases (De natura eorum quae effluunt ex terra); a treatise on references to minerals and mining in classical history (De veteribus et novis metallis); and a reprint of Bermannus. In De natura fossilium Agricola rejected the traditional arbitrary alphabetical listing of fossils (i.e., stony substances dug from the earth), and attempted to classify them according to their physical properties.

The twelve books of Agricola's De re metallica (On Metals), illustrated with over 270 woodcuts, embraced everything connected with Renaissance mining and metallurgical industries, including administration, the duties of companies and workers, prospecting, mechanical engineering, ore processing and the manufacture of glass, sulfur and alum. Book VI provided detailed descriptions of sixteenth-century mining technologies, such as the use of water-power for crushing ore and the improvements in suction pumps and ventilation that became necessary as mine shafts were sunk deeper underground; it also includes an account of the diseases and accidents prevalent among miners, along with the means of preventing them. It is thus a pioneering work in occupational medicine. De re metallica remained the standard textbook on mining and metallurgy for over two hundred years.

In 1912 American mining engineer and industrialist, and later 31st President of the United States, Herbert Clark Hoover and his wife Lou Henry Hoover issued a semi-facsimile edition and translation, with "Biographical Introduction, Annotations and Appendices upon the Development of Mining Methods, Metallurgical provesses, Geology, Minerology & Mining Law from the earliest times to the 16th Century," in London through the offices of The Mining Magazine. The work, which remains definitive, was published in the same format as the first (1556) edition with a parchment-style binding over boards that also resembled a 16th century binding. Cyril Stanley Smith, in his catalogue of the Hoover collection, De re metallica: The Herbert Clark Hoover Collection of Mining & Metallurgy (1980), cites a summary report of March 28, 1914 stating that Hoover had received 509 copies of the translation, 31 copies had been sent for review, 814 had been sold and 122 remained in the hands of the booksellers. This gives a total of 1,476 copies printed, a figure more plausible than Hoover's later claim of 3,000 copies (Memoirs I, pp. 117-119). Mrs. Hoover, a former Latin teacher, was responsible for the translation. As far as I know, Hoover was the only U.S. President to collect rare books on a scientific or technological subject and also the only President to publish a scholarly work on the history of science and technology.

In February 2014 a searchable digital facimile of the Hoover translation was available at this link. Concerning the writing and publishing of the 1556 edition I quote from p. 19 of the Hoover edition:

"Agricola seems to have been engaged in the preparation of De Re Metallica for a period of over twenty years, for we first hear of the book in a letter from Petrus Plateanus, a schoolmaster at Joachimsthal, to the great humanist, Erasmus, 16 in September, 1529. He says: The scientific world will be still more indebted to Agricola when he brings to light the books De Re Metallica and other matters which he has on hand.' In the dedication of De Mensuris et Ponderibus (in 1533) Agricola states that he means to publish twelve books of De Re Metallica, if he lives. That the appearance of this work was eagerly anticipated is evidenced by a letter from George Fabricius to Valentine Hertel: “With great excitement the books De Re Metallíca are being awaited. If he treats the material at hand with his usual zeal, he will win for himself glory such as no one in any of the fields of literature has attained for the last thousand years.' According to the dedication of De Veteríbus et Novis Metallís, Agricola in 1546 already looked forward to its early publication. The work was apparently finished in 1550, for the dedication to the Dukes Maurice and August of Saxony is dated in December of that year. The eulogistic poem by his friend, George Fabricius, is dated in 1551.

"The publication was apparently long delayed by the preparation of the woodcuts; and, according to Mathesius, many sketches for them were prepared by Basilius Wefring. In the preface of De Re Metallíca Agricola does not mention who prepared the sketches, but does say: 'I have hired illustrators to delineate their forms, lest descriptions which are conveyed by words should either not be understood by men of our own times, or should cause difficulty to posterity.' In 1553 the completed book was sent to Froben for publication, for a letter19 from Fabricius to Meurer in March, 1553, announces its dispatch to the printer. An interesting letter 20 from the Elector Augustus to Agricola, dated January 18, 1555, reads: 'Most learned, dear and faithful subject, whereas you have sent to the Press a Latin book of which the title is said to be De Rebus Metallícis, which has been praised to us and we should like to know the contents, it is our gracious command that you should get the book translated when you have the opportunity into German, and not let it be copied more than once or be printed, but keep it by you and send us a copy. If you should need a writer for this purpose, we will provide one. Thus you will fulfil our gracious behest.” The German translation was prepared by Philip Bechius, a Basel University Professor of Medicine and Philosophy. It is a wretched work, by one who knew nothing of the science, and who more especially had no appreciation of the peculiar Latin terms coined by Agricola, most of which he rendered literally. It is a said commentary on his countremen that no correct German translation exists. The Italian translation is by Michelangelo Florio, as is by him dedicated to Elizabeth, Queen of England."