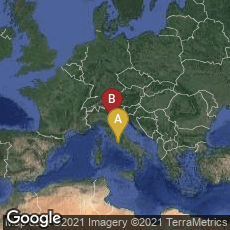 A guidebook to the topography and antiquities of Rome, Le antichita de la citta di Roma, first issued in Rome in 1556 by Lucio Mauro, is best-known for its supplementary survey of antique sculpture in the region by the young Ulisse Aldrovandi. This survey, entitled Delle statue antiche che per tutta Roma in diversi luoghi . . . si veggono, which occupies about two-thirds of the volume, was Aldrovandi's first publication. It has been called the first lengthy and detailed guidebook to the antiquities of the city of Rome, and a landmark in the scientific recording and documentation of works of art.

Though primarily remembered for his studies of natural history, Aldrovandi was also classical scholar, well versed in the literature and archaeology of antiquity. His Delle statue antiche is one of the earliest works on statuary and sculpture in general, a topic treated by relatively few treatises, and it has been essential for documenting the sculpture gardens and collections of antiquities that existed in Rome in the mid-16th century, for reconstructing the contents and the appearance of individual collections, and for establishing the provenance and tracing the history of individual statues.

As the only publication of the Bolognese naturalist to deal with antiquities, Delle statue antiche is an anomaly among Aldrovandi's published works. However, among the great mass of Aldrovandi’s unpublished manuscripts are extensive records of his investigations of ancient art and artefacts, and also of his studies of the habits and customs of daily life in antiquity. This broad knowledge of many aspects of the ancient world is reflected in Aldrovandi's Delle statue antiche.

Aldrovandi's work on statuary was written in Rome between 1549 and 1550 during an unplanned sojourn. While he was studying medicine in Bologna, in June 1549, Aldrovandi was accused of heresy, as a presumed follower of the anti-Trinitarian beliefs of Camillo Renato. Arrested along with other suspected individuals, Aldrovandi publicly renounced the heretical views, but he was nevertheless transferred to Rome to await a formal review. He remained in Rome, partly in custody, and partly at liberty, for at least eight months until absolved in April 1550. During this time he was befriended by many Roman scholars, and he undertook the investigation of Roman collections of ancient statues. And it was during this sojourn, in 1550, that Aldrovandi, according to his own account, wrote the Delle statue antiche. In it he included every signficant Roman collection of ancient sculpture, including:

"statues, torsos and fragments, but also reliefs and some inscriptions as well as minor antiqutieis in the studios of such connoiseurs as Cardinal Carpi or Gerolomo Garimberto. He frequently gives find spots, and his predispoition to logical order aids in recovering iconographic programs that often governed the installation of antique sculptures in vigne and staue gardens.

"Even without the drawings that seem to have been planned originally, Aldvrovandi's guide to ninety-odd private collections is unqiuely valuable to archaeologists and art historians" (Phyllis Pary Bober, in N.T. de Grummond (ed) An Encyclopedia of the History of Classical Archaeology,  I [1996] 31).