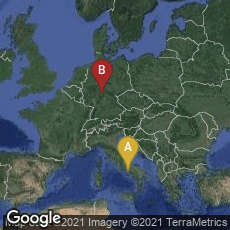 Codex Fuldensis, the Second Most Important Witness to the Text of the Latin Vulgate The Codex Fuldensis, (Fulda, Landesbibliothek, Bonifatianus 1) considered the second most important witness to the text of the Latin Vulgate, was written in an uncial hand, in one column, between 541 and 546 CE at Capua, Italy by order of Victor, bishop of that see, and was corrected by Victor personally in May 547, as indicated in his subscription on folio 433. It contains the whole New Testament together with the apocryphal Epistle to the Laodiceans. The Gospels are arranged in a single, consecutive narrative, in imitation of the Diatessaron, a prominent Gospel harmony created by Tatian, an early Assyrian Christian apologist and ascetic.

The manuscript is preserved at the Landesbibliothek, Fulda, Germany.

Parker, An Introduction to the New Testament Manuscripts and Their Texts (2009) 76.