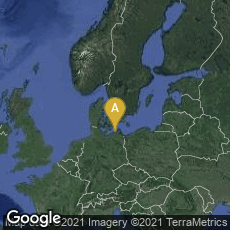 Is Kirchenbibliothek St. Marien Barth the Oldest Library in Germany? The Church Library of St. Mary's in Barth, Germany.

In 2014 the European Commission presented its Europa Nostra award to the Biblioteca Bardensis in Barth, Germany. The earliest reference to the library—also known as the Kirchenbibliothek St. Marien Barth— is a donation record of a collection of books given to the library by Barth pastor Hermann Hut (Hoet) on June 3, 1398. The library, located in the small town of Barth near the Baltic Sea, is one of the oldest parish libraries in Germany, and is also the oldest German library remaining in the exact location in which it was founded.

Among the holdings of the Kirchenbibliothek St. Marien Barth are a dozen or so medieval manuscripts, 130 incunabula and thousands of rare books, all of which were in bad need of restoration in 2014 after many years of neglect.