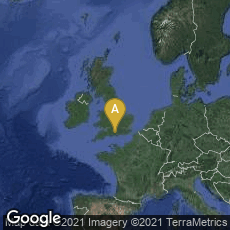 In March 2014 English antiquarian bookseller Simon Beattie drew the attention of the Ex-Libris newsgroup to a book he planned to exhibit at the New York Antiquarian Book Fair beginning on April 3, 2014. This book, which he characterized as "The first unwritten book," was published anonymously by writer and printer C. L. Lordan, "From the Press of J. Lordan, Romsey," England, in 1843. Beattie raised the question to the readers of Ex-Libris whether they knew of any earlier book composed by its author on the "composing stick," the tool used to compose lines of type when typesetting was done by hand, rather than on paper.

Lordan's book was entitled Colloquies, Desultory and Diverse, but Chiefly upon Poetry and Poets: Between an Elder, Enthusiastic, and an Apostle of the Law. It was an octavo (206 x 129 mm) in half-sheets, [4], iv, [2], 200pp. plus a colophon leaf. Beattie stated that the method of writing the book was mentioned in a printed inscription on the leaf preceding the title-page. This leaf reads, "From Circumstances Herinafter Adverted to, The Sixty Copies of this Orignal Edition are Dispensed on Customary 'Considerations.' "

"The explanation is provided in full in a long dedication to John Wilson (a.k.a. ‘Christopher North’), the Scottish critic who edited Blackwood’s Magazine: ‘Of the little volume before you, one individual has been the composer, and compositor and imprinter throughout … The pen has been a stranger to the prose part of its composition, and the scribe’s office subverted: — with the exception of acknowledged quotations, I have been unaided by a line of manuscript or other copy. There is a rhythmical extravaganza in the sixth chapter, which I very reluctantly
signalize in this place, because the skeleton of twenty lines of it, or thereabouts, was pen-traced; the composing-stick has otherwise been my sole mechanical 'help to composition'."

"Included are ‘colloquies’ about Wordsworth and Shakespeare, and ‘twenty minutes talk about Milton’. The text was published in a trade edition the following year, where it was described as ‘the first unwritten book’. The identity of J. Lordan has not been specifically determined; the typography looks fairly normal throughout, save for the first leaf and the colophon, which are printed in a rather primitive type-face. C. L. Lordan’s name appears in the imprint of a number of later books of Romsey interest, but as a publisher rather than a printer.

Users of this database may have noticed that I sometimes collect copies of items that I write about, especially in the field of book history. That only 60 copies of this very unusual volume were issued, and from the very unusual printing location— the town of Romsey, appealed to me, and I was pleased to successfully order the book. When I wrote this database entry on March 27, 2014 I planned to pick it up at the New York Book Fair in April.

Whether Lordan's book was actually the first book composed by its printer on the composing stick was unclear from responses that came from readers of Ex-Libris. My first thought was that I had heard, but never confirmed, that the French 18th century printer novelist / pornographer Nicolas-Edme Rétif may have done some of his writing directly on the composing stick. Whether he actually issued a complete book in this manner was unknown to me; perhaps I will have time to research the question some day.

Other books written on the composing stick mentioned by readers of Ex-Libris were:

1. Beattie mentioned that possibly certain works by the paper historian and printer Dard Hunter were written during the hand-typesetting process.

2. Rowan Gibbs wrote that "Benjamin Farjeon is said to have done this with the first edition of his first novel, Shadows on the Snow, published in Dunedin [New Zealand] at the end of 1865. He was working as a compositor on the Otago Daily Times."

3. Others indicated that various, presumably short works, had been written directly into type in various book arts projects in the past few decades.