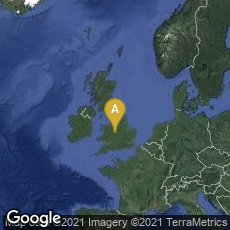 The first use of virtual reality in a museum or archaeological application occurred in 1994 when a museum visitor interpretation provided an interactive virtual "walk-through" of a 3D reconstruction of Dudley Castle in England as it was in 1550. The presentation consisted of a computer controlled laserdisc-based system designed by British based engineer Colin Johnson. The system was featured in a conference held by the British Museum in November 1994, and in the 1996 book entitled Imaging the Past - Electronic Imaging and Computer Graphics in Museums and Archaeology. One of the first users of the Virtual Heritage production was Queen Elizabeth II, when she officially opened the visitor center in June 1994. Because the Queen's officials had requested titles, descriptions and instructions of all activities, the system was named 'Virtual Tour', being a cross between Virtual Reality and Royal Tour.