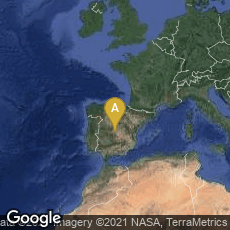 In April 2014 the Museo del Prado, the Biblioteca Nacional de España, and Fundación El Greco 2014 presented an exhibition entitled El Greco’s Library. The painter El Greco (Doménikos Theotokópoulos) was born in Crete. When he died in Toledo on April 7, 1614, he had among his belongings 130 books recorded in two inventories written by his son Jorge Manuel Theotokopoulos, one of which was compiled a few weeks after the death of the painter, and the other developed in 1621 as evidence of the goods Jorge Manuel brought to his second marriage.

The aim of the exhibit, and the accompanying book published by the Prado entitled, Biblioteca del Greco (2014), was to reconstruct the theoretical and literary roots of El Greco’s art through his library. Notable among his books was a copy of Vitruvius’s treatise on architecture from the Biblioteca Nacional de España, and a copy Vasari’s Lives of the Most Excellent Painters, Sculptors and Architects. Both were copiously annotated by El Greco with comments that revealed his ideas on architecture and on painting. Also on display was a copy of Xenophon’s Works and one of Appian’s Civil Wars, both of which were represented in his library, and one of Sebastiano Serlio’s architectural treatise with annotations that have on occasions been attributed to the artist. The exhibition was completed by three manuscripts, nine prints that probably inspired compositions by El Greco, and five paintings which showed the relationship between his pictorial output and the books in his library. Also on display were the original inventories of 1614 and 1621, and a letter from the artist to Cardinal Alessandro Farnese. The exhibition also included nine prints, mostly by Cornelis Cort and Dürer, which were key reference points for the painter, and five paintings, including Boy Blowing on an Ember and The Annunciation, which reveal the relationships between the artist’s pictorial creations and his books.

In total, the exhibition included 56 works that introduced visitors to what El Greco read and wrote, his knowledge and thinking, with the aim of understanding the ideas on the art of painting that underpinned his creative activities. The five sections of the exhibition reconstructed the artist’s career and analysed the way he saw painting as a speculative science. The first section emphasized the importance of El Greco’s Greek heritage throughout his life, while the second and third sections showed the key role that Italian culture played in his artistic transformation. The largest section focused on books on architecture, which highlighted El Greco’s interest in the universal nature of this discipline, and its influence on the status of painting as a liberal art. The exhibition closed with a small section on religious imagery, including a copy of Alonso de Villegas’s Flos sanctorum [Flowers of the Saints], which includes the first reference to the painter in print.

"Based on the original documents of these two inventories, the exhibition is organised into five sections which together present its theoretical argument.

Greek forefathers and the classical heritage

This section reveals the importance of Greek culture on El Greco, who was always manifestly proud of his origins. This is evident in the copies he owned of classical texts by Homer, Appian and Xenophon and others on the life of Alexander the Great, a hero of Greek history and the paradigm of artistic patronage due to his support for Apelles, of whom El Greco may have considered himself a modern personification. Also notable in this section is the absence of books by Plato in the artist’s library and the contrasting presence of works by Aristotle.

The second section analyses the definitive transformation of El Greco’s painting following his time in Rome, Venice and other Italian cities. It was at this point and through an intensive process of self-education based on his knowledge of other artists’ work, his contacts with intellectuals and his own reading that he assimilated the prevailing practice and theory of art. At this point El Greco began to see painting as an autonomous discourse that went beyond the moralising depiction of subjects inspired by mythology, history and religion.

Painting as a speculative science

This section provides the exhibition’s central focus, given that El Greco believed that painting could imitate the invisible but also the impossible: in other words, he conceived of it as a means to explore the wonders of the real and to represent mythological subjects or sacred mysteries.

While El Greco championed the hegemony of painting in relation to sculpture and architecture, at this period it was habitual to consider the latter the preeminent art form due to its traditional association with the liberal arts and because a knowledge of it was essential for becoming a 'universal man'. This is how the artist must have seen himself: he designed the architectural settings for some of the altarpieces into which his paintings were set and also wrote an architectural treatise, the contents and whereabouts of which are now unknown. These issues explain why his library included several copies of Vitruvius’s treatise as well as copies of the most important architectural treatises published in his own day, such as those by Sebastiano Serlio, Vignola and Andrea Palladio.

The problem of religious imagery

The final section emphasises the fact that although much of El Greco’s output consists of religious paintings, he did not devote a single one of his reflections to this subject and only owned around eleven books on religion. Aside from his own religious practice, he must have used these books to ensure that his works were doctrinally correct and conformed to contemporary precepts of decorum" (http://artdaily.com/news/69256/Three-Spanish-cultural-institutions-join-forces-to-present--El-Greco-s-Library--exhibition#.U0KgN61dUmQ,  accessed 04-07-2014).