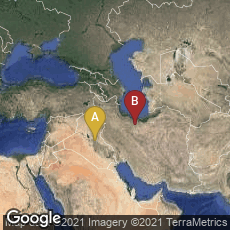 "The final page of the copy of the Hawi by al-Razi, with the colophon in which the unnamed scribe gives the date he completed the copy as Friday, the 19th of Dhu al-Qa`dah in the year 487 (= 30 November 1094). It is the oldest volume in NLM and the third oldest Arabic medical manuscript known to be preserved today,
NLM MS A17, p. 463."

The earliest surviving manuscript of The Comprehensive Book on Medicine (Kitab al-Hawi fi al-tibb) by Muhammad ibn Zakariyā Rāzī(Persian: محمد زکریای رازی‎ Mohammad-e Zakariā-ye Rāzi, also known by his Latinized name Rhazes or Rasis) is NLM MS A17 preserved in the U.S. National Library of Medicine. This manuscript was completed by an unknown scribe, probably working in Baghdad, on November 30, 1094 ((19 Dhu al-Qa`dah 487 H). It is the third oldest surviving codex of a medical work written in Arabic.

Razi (Rhazes) was born in the second half of the ninth century, possibly 854 or 865 CE in Rey (Rayy), a town located on the southern slopes of the Alborz Range situated near Tehran. He died in the same town about 925 CE (312 H). In Razi's time Rey was located on the Great Silk Road that facilitated trade and cultural exchanges between East and West. His name Razi in Persian means "from the city of Rey", an ancient town called Ragha in old Persian, or Ragâ in old Bactrian.

A physician learned in philosophy as well as music and alchemy, Razi served at the Samanid court in Central Asia, and headed hospitals in Rey and Baghdad. He was the author of over 200 treatises, several of which remained standard works in the Middle East and Europe through the Middle Ages and into the Renaissance. Some of his treatises were regarded as having practical value as late as the 18th century.

In spite of the profound and extremely durable nfluence of Razi and other Middle Eastern physicians, such as ibn-Sina or Albucasis, when I wrote this entry in April 2014 the NLM website stated that NLM MS A17 was "the oldest volume in NLM and the third oldest Arabic medical manuscript known to be preserved today." Their website did not identify the two earliest Arabic medical manuscripts, and when writing this I made a mental note to attempt to identify them. The paucity of survival of the earliest Arabic manuscripts is reflective of the lack of stability in Middle Eastern institutions, and also, possibly, of the tendency of medieval translators from the Arabic into Latin to discard the texts from which they worked after the translations were complete.

MS 17 preserves only one section of Razi's Kitabl al-Hawi fi al-tibb, the section on gastrointestinal ailments. Razi's Comprehensive Book on Medicine (Kitab al-Hawi fi al-tibb) was a large private notebook, or commonplace book, into which Razi placed extracts from earlier authors regarding diseases and therapy and also recorded clinical cases of his own experience. The material comprising the Hawi is arranged under headings of different diseases, with separate sections on pharmacological topics.

"Following al-Razi's death, Ibn al-`Amid, a statesman and scholar appointed vizier to the Persian ruler Rukn al-Dawlah in 939 (327 H), happened to be in the town of Rayy and purchased from al-Razi's sister the notes comprising the Hawi, or Comprehensive Book. He then arranged for the pupils of al-Razi to put the notes in order and make them available. The Hawi is an extremely important source for our knowledge of Greek, Indian, and early Arabic writings now lost, for al-Razi was meticulous about crediting his sources. Moreover, the clinical cases, while not unique, are the most numerous and varied in the Islamic medieval medical literature.

"Europe knew al-Razi by the Latinized form of his name, Rhazes. His Comprehensive Book on Medicine, the Hawi, was translated into Latin in 1279 under the title Continens by Faraj ben Salim, a physician of Sicilian-Jewish origin employed by Charles of Anjou to translate medical works. Even more influential in Europe was al-Razi's Book of Medicine Dedicated to Mansur, a short general textbook on medicine in ten chapters which he had dedicated in 903 (290 H) to the Samanid prince Abu Salih al-Mansur ibn Ishaq, governor of Rayy. The treatise was translated into Latin in Toledo by Gerard of Cremona (d. 1187) and was known as Liber ad Almansoris. It became one of the most widely read medieval medical manuals in Europe, and the ninth chapter, on therapeutics, frequently circulated by itself under the title Liber nonus ad Almansorem. In the Renaissance many editions of it were printed with commentaries by the prominent physicians of the day, such as Andreas Vesalius.

"A third treatise by al-Razi that was also influential in Europe was his book on smallpox and measles (Kitab fi al-jadari wa-al-hasbah). His was not the earliest monograph on the subject -- that honor goes to Thabit ibn Qurrah, a 9th-century Sabian Syriac-speaking translator and scholar working in Baghdad who became one of the great names in the history of Islamic science, especially in mathematics and astronomy. Al-Razi's treatise on smallpox and measles was, however, the more influential and was twice translated into Latin in the 18th century at a time when there was much interest in inoculation or variolation around 1720 following the description of the procedure in Turkey by Lady Mary Wortley Montagu, wife of the Ambassador Extraordinary to the Turkish Court in Istanbul.

"Among al-Razi's smaller medical tracts were treatises on colic, on stones in the kidney and bladder, on curing diseases in one hour (such as headache, toothache, haemorrhoids, and dysentery in small children), on diseases of children, on diabetes, on food for the sick, on maladies of the joints, on medicine for one who is unattended by a physician, on medical aphorisms, and on the fact that some mild diseases are more difficult to diagnose and treat than the serious ones. He also composed a book on the reason why the heads of people swell at the time of the roses and produce catarrh, in which he was apparently the first to relate hay fever to the scent of roses" (http://www.nlm.nih.gov/exhibition/islamic_medical/islamic_06.html, accessed 04-09-2014).