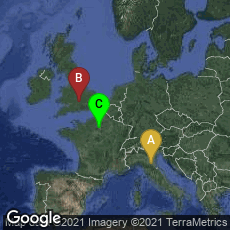 The Universitas Guild: Early Origin of What We Characterize as a University "First of all, it is clear that the earliest three 'universities'— the universitas guilds of Bologna, Paris, and Oxford—appear at approximately the same time in history, the late twelfth or early thirteenth century; regardless of scholarly tradition, none has been demonstrated with any certainty to be significantly earlier than the others. However, it cannot be overemphasized that although the Latin word universitas is usually translated as university, the early universitas was totally unlike a university in its purpose, structure, and functions. The word universitas originally meant an 'incorporated' guild of any kind. Although the word universitas later acquired the meaning of a 'guild of scholars' specifically, even then it still was strictly a guild; it was nothing like a university: 'The universitas was in its origin a voluntary association of indvidual masters rather than a single educational institution conducted by an organized staff. The universitas prescribed the studies which were to lead to the master's chair; but it did not attempt to interfere with the discipline of the scholars. In a sense all scholars were regarded as members, though not as governing members, of the Universitas of Masters and Scholars.'

"In short, the scholars' universitas, however influential we might think it was, long remained a guild, pure and simple: 'At the outset it [the term universitas] was applied to a single group that formed a legally recognized self-governing association. Thus a faculty of arts was a 'university' as was any faculty of medicine or faculty of theology. The masters and students of the arts faculty formed their own legal corporation, or university, as did the teachers and students of the medical faculty, and so on.'

"The early universitas guilds of scholars did not own buildings or other physical property, they were not supported by permanent financial arrangements such as pious foundations, and they did not have much of anything else that we think marks an institution of higher education as such. The only significant thing the early universitas guilds did have that we would recognize as related to the function of university was the right to bestow an advanced degree—the license to teach— and this has been shown to be a borrowing from the earlier attested ijaza li-'l-tadris 'license to teach' of medieval Islamic culture.

" 'The term that was initially employed and was in common use by the middle of the thirteenth century, to encompass all of these individual disparate universities, or university associations, was studium generale. Every master and student was a member not only of his own individual university, or corporation, but also of the studium generale. . . .The term was usuually assigned to schools that either were sufficiently prestigious, such as the customary universities of Paris, Oxford and Bologna, or were large enough to include at least three of the four traditional faculties (arts, theology, law, and medicine), or were both.'

"But by the mid-thirteenth century, when the term studium generale came into general use, the college had already spread everywhere too. its influence on the universitas, and vice versa, was such that a new institution developed out of both, namely, the university in the modern sense. The college is considered by Verger to have been the most dynamic new feature in Western European higher education. The term university replaced studium generale by the end of the Middle Ages, marking the merger of the universitas, the studium generale, and the college into the early modern college-university" (Christopher Beckwith, Warriors of the Cloisters. The Central Asian Origins of Science in the Medieval World [2012] 43-45. ♦Note that I have not included the many footnotes to statements in this quote. The interested reader is advised to consult this very worthwhile book for further details, and for Beckwith's overall historical argument.).