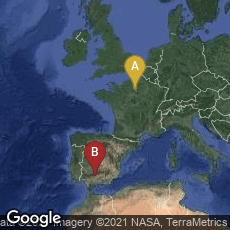 Simultaneous Appearance in Medieval Europe of the College, the Recursive Argument Method, Translations of Scientific Works from the Arabic, & Translations of Aristotle's Works

"Late twelfth-to early thirteenth-century Western Europe thus saw the more or less simultaneous appearance of the college, the recursive argument method, and translations of independent Greek and Classic Arabic scientific-philosophical works as well as translation of many of Aristotle's works from Greek and from Arabic, along with Arabic commentaries on them.

'Traveling clerics, French prelates posted in Spanish cities, and others kept scholars in France, England, and elsewhere in Europe in constant contact with the scholars working on translation of Arabic texts in Spain. Translations of Aristotle, Avicenna, and related works seem to have been in circulation in Paris within a decade or two after their translation. Because the translators focused on the one hand on works by classical Greek authors, especially Aristotle and his Arabic commentators, and, on the other, on Arabic scientific works, including the magisterial works of Avicenna on medicine and natural philosophy, the translations instantly acquired extremely high prestige in Europe. Western Europeans welcomed with open arms what became a flood of literature by philosopher scientists with the exotic Latin names Alfarabius, Agorithmus, Alhazen, Akindius, Avicenna, Averroës, and many others. The result was the 'intellectual revolution' of the twelfth and thirteenth centuries in Medieval Latin Europe.

"The newly translated texts became so popular so quickly that study of many of them by students of the University of Paris was banned in 1210 by a Church decree. As similar decree issued in 1215, also considered to be the charter of the university, was promulgated by Robert of Cuzon (Robert de Courçon, d. 1218), an English cleric who studied and taught in Paris, but that decree was apparently also ignored. By 1255 all of Aristotle's works were being taught at the University of Paris. The new translations were officially approved (with the exception of a few specific arguments considered heretical), and were assigned as the new 'liberal arts' curriculum—most of which consisted of logic and 'natural philosophy'—that was required of all bachelor's level university students in Western Europe" (Christopher Beckwith, Warriors of the Cloisters. The Central Asian Origins of Science in the Medieval World [2012] 107-08).