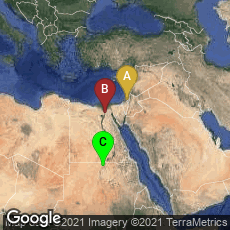 Most often written upon statuettes of bound foreigners, bowls, or blocks of clay or stone, which were subsequently destroyed, Execration Texts, also referred to as proscription lists, were ancient Egyptian hieratic  texts, listing enemies of the Pharaoh, enemies of the Egyptian state or troublesome foreign neighbors. The ceremonial process of breaking the written names and burying them was believed to be sympathetic magic that would affect the persons or entities named in the texts. This magical practice, in which Execration Text framents were usually placed near tombs or ritual sites, was most common during times of conflict with Egypt's Asiatic neighbors.

"The Execration texts are an important resource for researchers in the field of ancient Near Eastern history of the 20th-18th centuries BCE and Bible studies. The first group of Execration Texts were published by Kurt Sethe in 1926, known as the Berlin texts. Georges Posener published a second group of texts in 1957, known as the Brussels texts.

"The first collection are inscribed on pottery sherds, and contain the names of approximately 20 places in Canaan and Phoenicia, and over 30 rulers of the period. These texts contain what is possibly the first known mention of Jerusalem, from the beginning of the second millennium BCE, the end of the Eleventh dynasty to the Twelfth dynasty.

"The second group of texts are inscribed on figurines of bound prisoners discovered in Saqqara. This group contains the names of 64 places, usually listing one or two rulers. Seven known Asian countries are listed. This group has been dated to the end of the Twelfth dynasty.

"An additional group of texts, the Mirgissa texts, was published by Yvan Koenig in 1990" (Wikipedia article on Execration texts, accessed 07-12-2014).