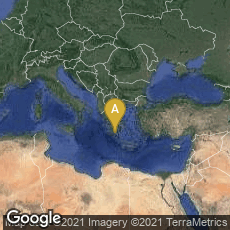 The Skytale: An Early Greek Cryptographic Device Used in Warfare Modern replica of an ancient skytale

The skytale (scytale, σκυτάλη "baton"), a cylinder with a strip of parchment wrapped around it on which was written a message, was used by the ancient Greeks and Spartans to communicate secretly during military campaigns. It was first mentioned by the Greek poet Archilochus (fl. 7th century BCE), but the first clear indication of its use as a cryptographic device appeared in the writings of the poet and Homeric scholar, Apollonius of Rhodes, who also served as librarian at the Royal Library of Alexandria.

Plutarch, writing in the first century CE, provided the first detailed description of the operation of the skytale:

The dispatch-scroll is of the following character. When the ephors send out an admiral or a general, they make two round pieces of wood exactly alike in length and thickness, so that each corresponds to the other in its dimensions, and keep one themselves, while they give the other to their envoy. These pieces of wood they call scytalae. Whenever, then, they wish to send some secret and important message, they make a scroll of parchment long and narrow, like a leathern strap, and wind it round their scytale, leaving no vacant space thereon, but covering its surface all round with the parchment. After doing this, they write what they wish on the parchment, just as it lies wrapped about the scytale; and when they have written their message, they take the parchment off and send it, without the piece of wood, to the commander. He, when he has received it, cannot otherwise get any meaning out of it,--since the letters have no connection, but are disarranged,--unless he takes his own scytale and winds the strip of parchment about it, so that, when its spiral course is restored perfectly, and that which follows is joined to that which precedes, he reads around the staff, and so discovers the continuity of the message. And the parchment, like the staff, is called scytale, as the thing measured bears the name of the measure.
—Plutarch, Lives (Lysander 19), ed. Bernadotte Perrin (quoted in Wikipedia article on Scytale, accessed 04-05-2014).

From Plutarch's description we might draw the conclusion that the skytale was used to transmit a transposition cipher. However, because earlier accounts do not confirm Plutarch's account, and because of the cryptographic weakness of the device, it was suggested that the skytale was used for conveying messages in plaintext, and that Plutarch's description is mythological. Another hypothesis is that the skytale was used for "message authentication rather than encryption. Only if the sender wrote the message around a scytale of the same diameter as the receiver's would the receiver be able to read it. It would therefore be difficult for enemy spies to inject false messages into the communication between two commanders" (Wikipedia article on Scytale, accessed 08-05-2014).