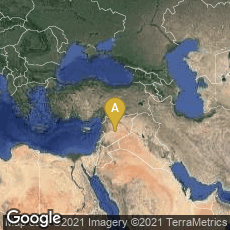 Palmyrenic inscription preserved in the Louvre.

The first significant decipherment of an ancient script was that of Palmyrene, a West Aramaic dialect spoken in the city of Palmyra, Syria in the early centuries CE. This was known from the church fathers to be similar to Syriac. "Copies" of Palmyrene script were available in print since 1616 but these were not helpful for decipherment. It was only after the British clergyman and orientalist John Swinton published accurate copies of paired inscriptions in Greek and Palmyrene in his paper, "An Explication of All the Inscriptions in the Palmyrene Language and Character Hitherto Publish'd," Philosophical Transactions of the Royal Society of London, 48/2 (1755) 690-756 that French writer, numismatist and linguist Abbé Jean-Jacques Barthélemy could correlate the two. The first word in one of the inscriptions was the name Septimios. Barthélemy was able to match the Palmyrene letters with the Greek, and he also discovered that they were recognizably similar to both Hebrew and Syriac. Swinton's paper was read to the Royal Society in a series of letters beginning on June 20, 1754. Barthélemy pubished his results in a 32-page pamphlet entitled Réflexions sur l'alphabet et sur la langue dont on se servoit autrefois à Palmyre issued in Paris in 1754. From the Approbation of the pamphlet dated July 18, 1754 it is evident that the reading of Swinton's initial letter, and the inscriptions made available, provided key information for Barthélemy, who reproduced  on the three plates published with his pamphlet inscriptions initially brought to light by Swinton with referencing Swinton in any way. Barthelemy's pamphlet was reprinted in Mémoires de l'Académie des Inscriptions et Belles Lettres, 26 (1759) 577-97.