Copy of the very rare Coloritto (1725) in the Bibliothèque nationale de France. 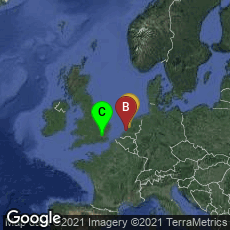 Working in London, the painter Jacob Christoph Le Blon, a citizen of Frankfurt, secured a patent in 1719 from George I for a process which he called "printing paintings." Much as fifteenth century printers viewed printing by movable type as a less expensive way to reproduce texts that had previously been reproduced by manuscript copying, Le Blon viewed his process of color printing as a less expensive way of producing or reproducing color paintings. Prior to moving to London Le Blon worked as a miniaturist in Amsterdam, and it is thought that he might have been influenced by the anonymous third edition of Traité de la peinture en mignature issued in The Hague in 1708, which described trichromancy in terms of three couleurs primitives— yellow, red and blue.

In London Le Blon formed a company called The Picture Office to produce color prints. The historian of anatomical illustration Ludwig Choulant stated that in 1721 Le Blon issued a separate print depicting the male sexual organs entitled Préparation anatomique des parties de l’homme, servants a la generation, faites sur les decouvertes les plus modernes.  As he states in the caption, Le Blon copied the image from a black & white version in William Cockburn's publication, The Symptoms, Nature, Cause, and Cure of a Gonorrhoea (London, 1713). This print, may be the first, or among the first, color-printed mezzotints ever published. In 1725 Le Blon privately published a pamphlet called Coloritto, describing the process that he had invented. This was the first published description of trichromatic color printing.

To prepare each of his three printing plates, Le Blon used the technique of mezzotint engraving in which a copper sheet is uniformly roughened with the finely serrated edge of a burring tool, and local regions are then polished, to varying degrees, in order to control the amount of ink that they are to hold. To develop his process Le Blon needed to find three colored inks of suitable transparency, and to analyze the color that was to be reproduced into its components. Sometimes he used a fourth plate, carrying black ink. This technique allowed the use of thinner layers of colored ink, reducing cost, and accelerating drying.