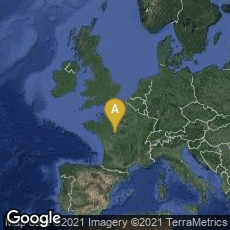 One of three surviving illustrated manuscripts of the Bible produced in Tours at the Benedictine abbey of St. Martin in the ninth century, the Moutier-Grandval Bible (British Library Add MS 10546) contains the entire Latin Vulgate text as revised by Alcuin of York. It was probably created during the abbacy of either Adalhard (834-843) or Vivien (843-851) or slightly earlier in the transition period between the abbacies of Fridigus (807-834) and Adalhard.

Reflective of the scale of book production at Tours during this period, some twenty different scribes worked on this immense volume, which contains 449 folios measuring 495 x 380 mm. The decorated initials are followed by square capitals and uncials which lead into the text script, which is a form of Caroline minuscule, upgraded here by the introduction of some variant letter-forms such as "a"  The four full-page miniatures are derived from classical art.

"The large format, the generous margins, and the richness of decoration reveal the prestigious nature of the manuscripts. The hierarchy of scripts— a large initial, Versal capitals, Uncials and minuscules (in descending order) — are used to great effect.

"The emergence of the Caroline minuscule is one of the great developments in the history of calligraphy. It derived from ancient Roman Half-uncial scripts, incorporating features from local hands. The abbey of Corbie played a major rôle in its evolution, especialy with its Maudramnus script. . . .It is a mature script of enduring quality. It was to be copied and adapted in succeeding centuries by scribes in England, Germany and Italy. Humanist scribes revived it, early in the 15th century, as an appropriate hand for the copying of classical texts. The first Italian printers then adopted it, and it has remained the baiss of Western typography to this day.

"The script of the Moutier Grandval Bible, though very small, is extremely consitent and well formed. Even some of the largers scripts of the Gospels and psalters made at Tours (eg. British Library Harley Mss. 2790 ans 2793) lack its rhythm and structure" (Stan Knight, Historical Scripts from Classical Times to the Renaissance [2009] C5 (p. 51).d).

From Tours the manuscript passed to the Benedictine abbey of Moutier-Grandval, Jura, canton of Berne, Switzerland (founded in 640 by the abbaye of Luxeuil). During the Swiss reformation in 1534 it was taken by the canons of Moutier-Grandval to Delémont (Delsberg) where they fled and established a new community. This community was  dissolved in 1802 by the concordat between Napoleon Bonaparte and Pope Pius VII. In 1821/22 the manuscript was apparently found at the former chapterhouse at Delémont by children and passed to 'demoiselles Verdat', owners of the property. It was bought from Verdat by Alexis Bennot (d. 1837), advocate, vice-president of the court of Delémont, and sold to Henry Speyr-Passavant (1782-1852), a bookseller from Basel, on March 19, 1822. In 1829 Speyr-Passavant issued a monograph on the manuscript that contained many testimonials as to its authenticity, and what we understand today as overstatements of its importance, by leading experts of the time: Description de la bible écrite par Alchuin, de l'an 778-800, et offerte par lui à Charlemagne le jour de son couronnement à Rome, l'an 801. Par son propriétaire, M. J. H. de Speyr-Passavant. In 1836 Speyr-Passavant sold the manuscript to the British Museum for £750, an enormous price for an illuminated manuscript at the time.

In August 2014 a digital facsimile of the Moutier-Grandval Bible was available from the British Library at this link.