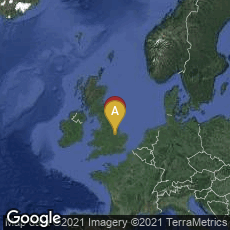 The Luttrell Psalter, Preserving the Memory of Ordinary Folk Alongside the Mighty and the Wealthy Between 1320 and 1340 Sir Geoffrey Luttrell, Lord of the Manor of Irnham, Lincolnshire, England, commissioned the Luttrell Psalter (British Library Add. MS 42130). This psalter, written by a single anonymous scribe and illustrated by at least five different anonymous artists, contains one of the most extensive collections of images of everyday rural life of both nobles and ordinary people in medieval England. While the Luttrell Psalter was not the first to include scenes of contemporary rustic life, the number of its images and their fascinating details, and their lively and often humorous aspects provide a virtual "documentary" of work and play during a year on an estate like Sir Geoffrey's. Because of the number of collaborators involved in its production it is thought that the psalter could not have been created in the small village of Irnham, but was perhaps created in the larger town of Lincoln.

"The Luttrell Psalter is one of the most intensely personalized of medieval books and betokens a heightened level of intimacy between patron, planner and maker. It is interesting that such audacious experiments in achieving a fully synthesized relationship between the conventional major decorated components of a liturgical or devotional manuscript and innovative didactic/entertaining images in its marginal space, should have been undertaken in a commission by a 'new man' with social aspirations, at the junction between the rural knightly classes and the great barons of the realm. Perhaps only such previously unploughed ground could successfully nurture the seeds of such innovation, free of the strangling conventions surrounding the production of books for royalty and the ecclesiastical hierarchy.

"In such cases, the relationships between the work's planners, patrons and makers in producing a combined 'text' bears comparison with the modern film industry. As in the collaboration between director, producer, production team and actors, each can contribute their own aspects of 'reading' or interpretation, without necessarily departing from an established 'script' or storyboard. Film is not usually 'history' or temporally disembodied 'art' (though it can be both) - neither is the Luttrell Psalter. It represents one of the most imaginative attempts in art to provide not only metaphorical and literal illustrations of the text, with word-images playing upon individual phrases, words or syllables  (as on f. 152v where two naked men are foot wrestling, taking their cue from the Latin word passer on the line above, which in courtly French indicates pas, 'step/foot', and also the past, passé, with which such exotic peoples were often associated in the medieval imagination and f. 87v, where the star announcing the birth of Christ to the Magi and the shepherds hangs from the phrase nati sunt, 'are born'), but to relate them to the trials and tribulations, boons and blessings of everyday life. The temporal continuum links past, present and future: its images seek not only to depict fourteenth century realities but also to explore eternal meanings" (Michelle P. Brown, The World of the Luttrell Psalter [2006] 56-57).

The Luttrell Psalter was acquired by the British Museum in 1929 with the assistance of financier and collector J. P. Morgan who loaned the museum the very high purchase of price of 30,000 guineas (£31,500) interest free. Because of the wide social appeal of its imagery, and its other unique features, the manuscript was the subject of extensive scholarship since it passed into public ownership. There were also two printed facsimile editions, the second of which (in full color) was issued by The Folio Society in 2006 with a commentary by Michelle P. Brown. In August 2014 a digital facsimile of the manuscript was available from the British Library at this link. With the digital facsimile the British Library posted a very detailed table of contents of the manuscript plus a bibliography of the most significant scholarly works about it. Also in August 2014 a portion of the manuscript was available from the British Library through its "Turning the Pages" program at this link. A collection of captioned still images from the psalter was available from Wikimedia at this link. In 2010 Lincolnshire Heritage Filmakers produced a 20 minute dramatization of events depicted in the manuscript entitled The Luttrell Psalter Film.

The contents of the manuscript, as listed by the British Library are as follows: