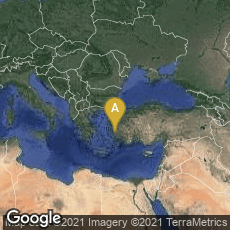 The Library of Celsus at Ephesus The Library of Celsus, at Ephesus. Celsus is buried in a sarcophagus beneath the library.

The library of Celsus was completed circa 115-125 CE in Ephesus, Anatolia in memory of Roman Senator Tiberius Julius Celsus Polemaeanus. A Greek Roman citizen who became a Roman consul in 92 and governor of Asia from 105-107, Celsus bequeathed a large sum of money for construction of the library, and for its stock of books. The facility, which incorporated Greek and Roman architectural elements, was designed both as a crypt containing Celsus's sarcophagus and as sepulchral monument. It was also designed to hold 12,000 book rolls in an expansive reading room.

The interior of the library and all its books were destroyed in 262 when a devastating earthquake struck the city. Thus we have no record of the contents of the library, as is the case for all libraries of the period. The front fascade of the library was restored during the 1960s and 1970s, and now serves as a model of Roman public architecture.