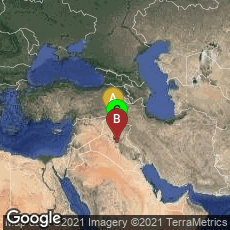 In September 2014 I learned through the mailing list of the Middle East Librarians Association of the report dated September 8, 2014 by Iraqi archaeologist and Iraq Heritage Senior Fellow, Abdulameer al-Hamdani, entitled Iraq's Heritage is Facing a New Wave of Destruction. This report I quote in full:

"Since early June, extremist armed groups, including ISIS, have controlled most of north-west of Iraq, from Mosul downward to Falouja on the Euphrates and Tikrit on the Tigris. According to ISIS law, archaeological sites, museums and artifacts, shrines and tombs, non-Islamic, and even non-Sunni worship places, modern statues and monuments, and libraries should not be existed and must be demolished.

"More than 4000 archaeological sites that are located in areas that have been controlled by ISIS are facing a serious threatening either by looting or destruction. The staff, as well as the archaeological sites' guards, of the antiquities' inspectorate of Ninawa province and other districts can't do their daily work in visiting and observing sites because both the security issues and the lack of fuel and vehicles to be used.

"The well-preserved fascinating Assyrian capitals of Nineveh, Nimrud, Khorsabad, and Ashur, as well as hundreds of ancient Mesopotamian sites, are targets that are going to be stolen and destroyed by ISIS. ISIS wants to diversify and expand its financial resources to include the lucrative trade of antiquities. For instance, on July 12th, a group of armed looters attacked the ancient city of Nimrud and stole a unique bas-relief from its palace that dates back to the Neo-Assyrian Empire in the eighth century BCE. Hatra, a Hellenistic city from the second century BCE, is isolated in the desert south west of Mosul, in an area that has been used by ISIS to train its fighters. Mosul museum, the second large museum in Iraq, has been occupied by ISIS and its staff cannot inter to check its valuable collections. ISIS plans to put statues from the museum on trial with plans to smash some statues and sell some. ISIS evacuated the houses around the Hadba-Leaning minaret that date to the twelfth century. It is not certain if the minaret is intended or the shrine of Ali al-Hadi who is buried in the Nidhamia School, which dates back to the same date of the minaret.

"Not only ancient Mesopotamian heritage has been destroyed, the Christian and Ezidian heritage and other religious and ethnic minorities in Mosul and Nineveh plain were targeted. Churches and monasteries either burned or occupied where ISIS stole the contents and put its flag upon them. St. Behnam monastery south-east on Mosul was occupied by ISIS and has been converted to be its headquarter in the region. The Virgin Mary Church in Mosul was blown and the image of the Mary statue torn down from the top is an older archive image.

"Even the Islamic heritage is also not spared from destruction. Apparently after the fundamentalists destroyed all the Shia mosques in Mosul and the other towns, they have now turned to the Sunni shrines. The Sunni shrines were destroyed by explosions and bulldozers; these include the shrines of Sheikh Fathi, Ibn al-Atheer, and Sultan Abdullah Bin Asim, the grandson of Caliph Omer. Before that, ISIS has exploded and demolished Shia and Sufi shrines and worship places in Mosul, Telafer, and Kirkuk. Among these shrines was the iconic-domed shrine of Yahya Bin al-Qasim in Mosul, which dates back to 13th century.

"The shrines of the prophets Daniel (Nabi Danial), Shayth (Nabi Sheeth), and zarzis (Nabu Jarjees) have also been destroyed. But nothing affected and harmed Iraqis like the demolishing and exploding of Prophet Jonah's shrine, the well-known as Nabi Yunis, which is respected by all Iraqis from different religions and ethnicities. The Shrine’s iconic minaret was from 1924 it replaced the Ottoman one that collapsed. However the fear is for what underneath the shrine, the Assyrian Palace, which has unusual winged-bulls were uncovered in the 1990 and some of them are visible. The city of Mosul has about two hundred heritage buildings, many are of the Ottoman Period, and some are still being used as government buildings. A number have already gone, destroyed by ISIS, the Sarai was the police headquarters and the Ottoman hospital, the head quarter of the Intelligence, and it was raised to the ground.

"Modern monuments and statues in Mosul have been smashed or removed. Among them was the statue of Abu Tammam, an Abbasid poet, who was died in Mosul in 845 AD, as well as the statue of Mulla Uthman al-Mosuly, a singer, musician and poet, who was born in Mosul in 1845. ISIS has also has took over public libraries in Ninawa and Diyala provinces. At Mosul University, ISIS met with some of the academics and informed that the College of Arts will be closed; some of Departments at the College of Archaeology will be closed. There will be a change of the entire Curriculum.