Image Source: upload.wikimedia.org
An old photograph that shows the arrangement of the stones in their semi-circular wall before the modern protective shelter was built over the inscription. 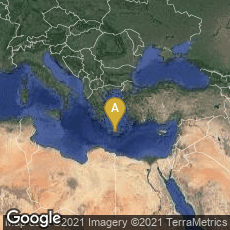 Image Source:
Part of the stone inscription of the Great Code at Gortyn. The type of inscription is called boustrophedron, in which alternate lines must be read in opposite directions rather than from left to right,

Written in the Dorian dialect, the Law Code of Gortyn was the codification of the civil law of the ancient Greek city-state of Gortyn in southern Crete. It is a type of stone inscription called boustrophedron, in which alternate lines must be read in opposite directions rather than from left to right, or right to left as in Arabic. It derives from βους, "ox" + στρεφειν, "to turn" (cf. the etymology of strophe), because the hand of the writer goes back and forth, so that the resulting inscription resembles the path of an ox that draws a plow across a field and turns at the end of each row to return in the opposite direction.

Though only a major portion of the code survived, the twelve columns that remain are 30 feet in length and 5 feet in height and contain some 600 lines of text. The writing is uniform and is thought to have been carved by a single writer or sculptor. From the surviving code much concerning the civil law of Gortyn is known. Except for the inscription of Digoenes of Oenoanda in Lycia (now southwest Turkey) the Law Code of Gortyn is the longest extant Greek stone inscription.

Vasilakis, The Great Inscription of the Law Code of Gortyn (2007).