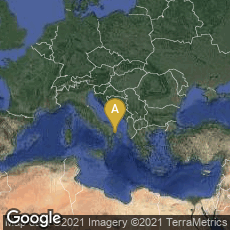 The Beginnings of Musicology Ἁρμονικῶν στοιχείων (Elementa harmonica; Elements of Harmony, or Harmonics),an incomplete treatise by the Greek Peripatetic philosopher Ἀριστόξενος (Aristoxenos, Aristoxenus of Tarentum), a pupil of Aristotle, represents the earliest surviving treatise on musicology. According to the Suda, Aristoxenos wrote 453 works on philosophy, ethics and music. However, Harmonics remains his only surviving work.

"Antiquity knew Aristoxenus [fl. 4th c. BCE] as ὁ Μουσικός, THE authority on music. While he was not the first person to write whole books dedicated specifically to music, he is the earliest musical writer whose work has survived in bulk.

"I must clarify. Aristoxenus's surviving work, and this is especially true of his Harmonics, does not deal with actual music, but with the material of music -- not with the nature of sound but with the nature of musical intervals and scales. In our days, the investigation of such things comes under the rubric of musicology. Sophie Gibson in her excellent study makes a convincing case that Aristoxenus was the inventor of this discipline.

"For sheer abstruseness, Aristoxenus's writings must lie near the top in ancient Greek. Aristoxenus's subjects, the nature of the musical material and of rhythm, are of themselves difficult. Scientific investigation of them at the time he wrote was at its very beginning, speculative, and confused.1 Though Gibson demonstrates that Aristoxenus followed Aristotle in method, she makes it clear that in the musical sphere he was determined not to owe anything to anybody. He lashed his predecessors, and elsewhere even Aristotle, says the Suda, when the former passed him over as successor for leadership of the Lyceum. Intellectual perplexity and odium scholasticum give his books a double edge; irritation is added to difficulty, rather like the Clarke-Leibniz correspondence.

"Furthermore, the most substantial piece of Aristoxenus's work we have, the Harmonics, survives in three incomplete books, of which Book I appears written at hazard, and Book II is a recasting of the same material, though exhibiting contradictions with Book I. Book III breaks off just when we might have been getting to something to do with real melody. From Books I and II of his Rhythmics there survive chunks, and only much smaller fragments from the rest of Aristoxenus's work.

"Notwithstanding these problems of fragmentation and opaqueness, Aristoxenus is an extremely important source for the study of ancient Greek music, where the evidence is so scarce that we need to squeeze out all we can anywhere we find it. I was delighted to read Sophie Gibson's excellent discussion of Aristoxenus's work, and I am most grateful for her heroic labor in elucidating it. Lucid indeed her exposition is, though necessarily requiring constant and diligent attention. A secondary work such as Gibson's is vital to the study of Aristoxenus, for in many places in his text it is not in the least obvious what he is trying to do, and in such a technical subject we need plenty of context. . . ." (Otto Steinmayer, review of Sophie Gibson, "Aristoxenus of Tarentum and the Birth of Musicology," Bryn Mawr Classical Review 2005.10.20).

Aristoxenos was first published in print in Venice, 1562, in the Latin translation of Antonius Hermannius Gogava as Aristoxeni musici antiquiss. harmonicorum elementorum [with other works]. The standard edition and English translation appears to remain The Harmonics of Aristoxenus, Edited with Translation, Notes, Introduction and Index of Words by Henry S. Macran (1902). Macran p. 92 characterized Gogava's translation as "a worthless work crowded with errors." Macran p. 90 stated that the earliest surviving manuscript of Aristoxenos's text is a Codex Venetus in the Biblioteca Marciana, Venice written by "Zosimus" in Constantinople in the twelfth century.

Venetus A, the Most Famous, and Most Significant Manuscript of the Iliad
The Suda, a Massive Byzantine Encyclopedic Dictionary
Completion of the Online Collaborative English Translation of the Suda