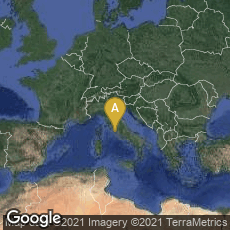 The Pyrgi Tablets inscribed in gold.

In 1964 during an excavation of ancient Pyrgi, the port of the southern Etruscan town of Caere on the Tyrrhenian coast of Italy (now Santa Severa), archaeologist Massimo Pallottino discovered three golden leaves bearing writing in Etruscan and Phoenician. Known as the Pyrgi Tablets, the leaves record a dedication made around 500 BCE by Thefarie Velianas, king of Caere, to the Phoenician goddess ʻAshtaret. Two of the tablets are inscribed in the Etruscan language, the third in Phoenician.

"These writings are important in providing both a bilingual text that allows researchers to use knowledge of Phoenician to interpret Etruscan, and evidence of Phoenician or Punici nfluence in the Western Mediterranean. They may relate to Polybius's report (Hist. 3,22) of an ancient and almost unintelligible treaty between the Romans and the Carthaginians, which he dated to the consulships of L. Iunius Brutus and L. Tarquinius Collatinus (509 BCE)" (Wikipedia article on Pyrgi Tablets, accessed 10-17-2014).

The tablets are preserved in the Museo Nazionale Etrusco in Rome.