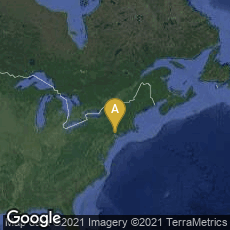 In April 1939 RCA's National Broadcasting Company (NBC) introduced regularly scheduled, electronic television broacasting in America. The first television broadcast aired was the dedication of the RCA pavilion at the 1939 New York World's Fairgrounds. It was introduced by David Sarnoff himself.

Later that month on April 30, opening day ceremonies at The World's Fair were telecast in the medium's first major production, featuring a speech by President Franklin D. Roosevelt, the first US President to appear on television.

These telecasts were seen only in New York City and the immediate vicinity, since NBC television had only one station at the time, W2XBS Channel 1, now WNBC Channel 4. The broadcast was seen by an estimated 1,000 viewers from the roughly 200 televisions sets which existed in the New York City area at the time.