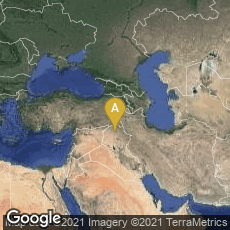 ISIS Burns the Manuscripts and Paintings at Mar Behnam Monastery Image Source: en.wikipedia.org
Entrance of the Monastery of the Sahade Mar Behnam and Marth Sara

On October 21, 2014 I learned from aleteia.org that Father Charbel Issa, head of the ancient Mar Behnam Monastery, also known as the Monastery of the Martyrs Saint Behnam and his Sister Sarah near Bakhdida in northern Iraq, reported that members of ISIS ripped down the monastery's crosses and burned its paintings and manuscripts. According to BBC.com on July 21, 2014 ISIS seized control of the monastery, and threatened the monks with execution. They were expelled with nothing but the clothes on their backs.

"Issa added in a statement to the website Ankawa.com that he had contacted the former mayor of al-Basatliyah, where the monastery is located, in order to ascertain conditions at the monastery. The mayor confirmed that members of ISIS had taken the crosses off the monastery’s roof and burned important manuscripts. Furthermore, ISIS wrote the words “Property of ISIS” on a large portion of its exterior wall."