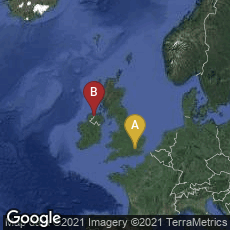 "The Great Parchment Book" and Its Digital Restoration After Three Centuries However, in February 1786, a fire in the Chamber of London at the Guildhall in the City of London destroyed most of the early records of the Irish Society, so that very few 17th century documents remain. Among those which survived is the Great Parchment Book, but the fire caused such dramatic shrivelling and fire damage to the manuscript that it was completely unavailable to researchers since this date.

"As part of the 2013 commemorations in Derry of the 400th anniversary of the building of the city walls, it was decided to attempt to make the Great Parchment Book available as a central point of an exhibition in Derry’s Guildhall.

"The manuscript consisted of 165 separate parchment pages, all of which suffered damage in the fire in 1786. The uneven shrinkage and distortion caused by fire had rendered much of the text illegible. The surviving 165 folios (including fragments and unidentified folios) were stored in 16 boxes, in an order drawing together as far as possible the passages dealing with the particular lands of different livery companies and of the Society.

"It soon became apparent that traditional conservation alone would not produce sufficient results to make the manuscript accessible or suitable for exhibition, since the parchment was too shrivelled to be returned to a readable state. However, much of the text was still visible (if distorted) so following discussions with conservation and computing experts, it was decided that the best approach was to flatten the parchment sheets as far as possible, and to use digital imaging to gain legibility and to enable digital access to the volume.

"A partnership with the Department of Computer Science and the Centre for Digital Humanities at University College London (UCL) established a four year EngD in the Virtual Environments, Imaging and Visualisation programme in September 2010 (jointly funded by the Engineering and Physical Sciences Research Council and London Metropolitan Archives) with the intention of developing software to enable the manipulation (including virtual stretching and alignment) of digital images of the book rather than the object itself. The aim was to make the distorted text legible, and ideally to reconstitute the manuscript digitally. Such an innovative methodology clearly had much wider potential application.

"During the imaging work a set of typically 50-60 22MP images was captured for each page and used to generate a 3D model containing 100-170MP, which allowed viewing at archival resolution. These models could be flattened and browsed virtually, allowing the contents of the book to be accessed more easily and without further handling of the document. UCL’s work on the computational approach to model, stretch, and read the damaged parchment will be applicable to similarly damaged material as part of the development of best practice computational approaches to digitising highly distorted, fire-damaged, historical documents" (http://www.greatparchmentbook.org/the-project/, accessed 10-26-2014).