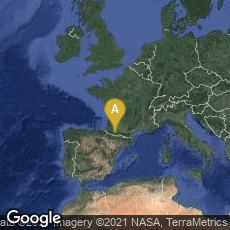 Between 1886 and 1889 the scholar Léon Nelli discovered the Le cheval de Lourdes (Lourdes Horse statuette) in the Grotte des Espélugues (Lourdes, Hautes-Pyrénées). It is 7.3 cm long. The carving was done in exceptionally fine detail, and it was long assumed that like other carvings of this time, the carving was made from Mammoth bone.

In November 2013, Jean-Marc Pétillon, researcher at CNRS, University of Toulouse-Le Mirail, announced in  the "Journal of human evolution" that the little horse from Lourdes was actually carved from whale bone. The presumption is that the bone came from a carcass found on the coast or from barter with coastal people.

Though Léon Nelli intended to publish his discovery of the horse and other art objects found in the Grottes des Espéluges, he left an unpublished treatise on these objects on his death in 1934.  His son, René Nelli, first published his father's manuscript as Chef-d'Oeuvre de la Grotte des Espélugues (Lourdes Htes-Pyr.). Fouilles de Léon Nelli, 1889. This was issued in Toulouse by the Institut d'Etudes Occitanes in 1948 in an edition limited to 100 copies.