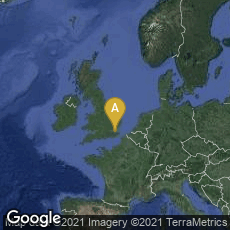 The Textus de Ecclesia Roffensi per Ernulphum episcopum (The Book of the Church of Rochester through Bishop Ernulf), usually referred to as the Textus Roffensis, is a collection of documents that includes the t,Law of Aethelberht attributed to Aethelberht of Kent, King of Kent from 560 or later to his death of February 24, 616, and the first Anglo-Saxon king to convert to Christianity. This is the first code of English law and the oldest surviving Anglo-Saxon text. It is also the earliest law code of any kind in any Germanic language and the earliest surviving document written in the English language. Though written about 500 years after Aethelberht's code was promulgated, the manuscript predates King John's Magna Carta by almost 100 years.

The second part of the Textus Roffensis is the oldest register of the Rochester Cathedral. It is thought that both sections of the manuscript were written by a single scribe.

The manuscript is preserved in the Medway Studies Centre in Rochester, Kent, England.  In November a digital facsimile was available from the British Library in its Hidden Treasures series at this link.

Four Copies of the Original Magna Carta Survived
Stephen Daye Issues "The Bay Psalm Book", the First Book Written & Printed in North America, North of Mexico
The Original Manuscript of Bracton's De legibus Did Not Survive
Sir Robert Bruce Cotton Collects One of the Most Important Libraries Ever Assembled by an Englishman
Alexander Hamilton Issues "The Magna Carta of Industrial America"
Edward I (Longshanks) Expells the Jews from England
George Cruikshank Caricatures the Suspension of Habeas Corpus in the Context of Freedom of the Press