Image Source: onlineonly.christies.com
This photograph of the curvature of the earth taken from a V2 rocket, sold at Christie's in London in November 2020, was used in a press release from London dated March 25, 1947.  The same image was reproduced in Bergstrahl's book with an outline key. Image Source: onlineonly.christies.com
Back of the press photograph sold at Christie's in November 2020 including the ditto'd caption and press service date stamps. 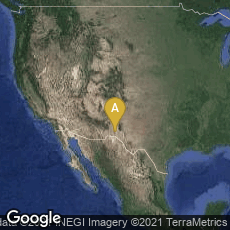 T. A. Bergstrahl Publishes the First Book of Photographs of the Earth Taken From Space Photography from the V-2 rocket at altitudes ranging up to 160 kilometers, by T. A. Bergstrahl,  N. R. L. report no. R-3083, issued by the Naval Research Laboratory, Washington, D.C. in April 1947 in an edition of only 47 copies, contains the first published photographs of the earth taken from space. The photographs, which show a large portion of the American southwest, were taken from cameras mounted on a V-2 (V2) rocket launched from the proving ground at White Sands, New Mexico. The rocket, which bore the number 21 but was the 20th V-2 launched at White Sands after number 1 misfired, was one of over 60 V-2 rockets captured from the Germans at the end of World War II in 1945. At that time the German rocketry program at Peenemunde was at least 20 years ahead of any other program. As part of Project Paperclip, the United States government brought both the captured V-2s and over 100 German rocketry experts (headed by Wernher von Braun) to America, where they began what became the U. S. space program. In 1946 the Upper Atmosphere Research Panel (also known as the V-2 panel) was formed to oversee a program of high-altitude experiments conducted using the V-2 rockets. On October 24, 1946 the research team was able to obtain photographs of the Earth taken from 65 miles above the surface; however, perhaps for quality reasons, these photographs were not published until 1950 (see Newell, High Altitude Rocket Research p. 288).

Berghstrahl's report announced that photographs were taken from more than 100 miles above the earth. “On 7 March 1947 the twentieth V-2 to be launched in America took to the air from the Army Ordnance Proving Ground at White Sands, New Mexico. As on several of the previous flights, an attempt was made to obtain photographs of the features of interest on the rocket and, of course, of the earth. In this attempt the effort met with considerable success. Included among the group of pictures obtained are the first ever to be taken from altitudes greater than 160 kilometers (100 miles). The quality of the photographs is fairly good. For the first time, in pictures taken at such high altitudes, it is possible to recognize clearly many geographical features. In addition a large number and variety of cloud formations were recorded by the cameras and other information of meteorological value” (p. 1).

Photographs 11 and 12 are especially notable. Number 11 includes an overlay showing landmarks in New Mexico, Arizona and the Gulf of California. The caption to number 12 states that “this picture covers approximately 500,000 square miles of southwestern United States and northern Mexico. The photographs [making up the composite] do not match exactly due to the varying camera angles.” Newell, High Altitude Rocket Research (1953), pp. 284-288. Krause, “High altitude research with V-2 rockets,” Proceedings of the American Philosophical Society 91 (1947) 430-446. Reichhart, “The first photo from space,” Air & Space Magazine, Smithsonian Institution, 1 Nov. 2006.

According to Reichhart, photography from V-2s launched at White Sands began on October 24, 1946, and there was a Universal newsreel on the topic issued in November 1946.

In 1947 the U.S. War Department produced a documentary film on the launching of V2 rockets from White Sands. The documentary excluded reference to photography done from the V-2 rockets: