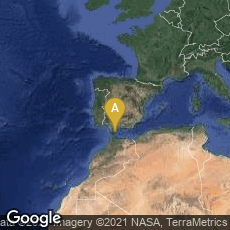 Possibly the Earliest Art Created by a Neanderthal An engraving in stone discovered in 2014 deep inside Gorham’s Cave, on the southeastern face of the Rock of Gibralter, may be the first art created by a Neanderthal. A team led by zoologist, paleoanthropologist and paleontologist Clive Finlayson, director of the Gibraltar Museum, which has been excavating the cave since the late 1980s, found that the Neanderthals who called the cave home ate fish, shellfish and birds, and perhaps survived later than their counterparts elsewhere in Europe. . . .

Clive Finlayson et al, "A rock engraving made by Neanderthals in Gibralter," Proceedings of the National Academy of Sciences, vol. 111 no. 3, September 16, 2014.

ABSTRACT: "The production of purposely made painted or engraved designs on cave walls—a means of recording and transmitting symbolic codes in a durable manner—is recognized as a major cognitive step in human evolution. Considered exclusive to modern humans, this behavior has been used to argue in favor of significant cognitive differences between our direct ancestors and contemporary archaic hominins, including the Neanderthals. Here we present the first known example of an abstract pattern engraved by Neanderthals, from Gorham’s Cave in Gibraltar. It consists of a deeply impressed cross-hatching carved into the bedrock of the cave that has remained covered by an undisturbed archaeological level containing Mousterian artifacts made by Neanderthals and is older than 39 cal kyr BP. Geochemical analysis of the epigenetic coating over the engravings and experimental replication show that the engraving was made before accumulation of the archaeological layers, and that most of the lines composing the design were made by repeatedly and carefully passing a pointed lithic tool into the grooves, excluding the possibility of an unintentional or utilitarian origin (e.g., food or fur processing). This discovery demonstrates the capacity of the Neanderthals for abstract thought and expression through the use of geometric forms."
"Alistair Pike, an archaeologist at the University of Southampton, UK, says that the engravings, if made by Neanderthals, represent a very important find. “It adds permanent rock engraving to the sparse but significant evidence for Neanderthal symbolic behaviour.” Ochre pigment, shell beads and other adornments have also been used to back the idea that Neanderthals possessed the sorts of symbolic cognitive powers that underlie language and religion" (http://www.nature.com/news/neanderthals-made-some-of-europe-s-oldest-art-1.15805, accessed 12-13-2014).