Deliberate scratching on a fossil Pseudodon, likely an engraving made by Homo erectus at Trinil in Indonesia. (Wim Lustenhouwer, VU University Amsterdam.) 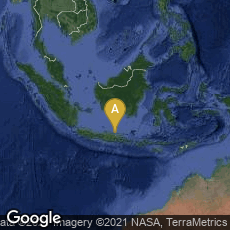 An engraved shell with a zigzag marking from a freshwater mussel species, collected in the 1890s by the Dutch palaeontologist Eugène Dubois, at Trinil on the banks of the Bengawan Solo River in Ngawi Regency, East Java, Indonesia, is the oldest abstract marking ever found. At Trinil Dubois discovered the first Homo erectus fossil — a skullcap — and other ancient human bones, which he called Pithecanthropus erectus. He also brought home dozens of shells excavated from the site. They were examined in the 1930s and later stored in a box in a museum in Leiden, the Netherlands.

"The engraving might have stayed undiscovered, were it not for Josephine Joordens, a biologist at Leiden University. She had been working a project on how H. erectus used marine resources at Trinil, which is around 80 kilometres inland from the Java Sea. She found only freshwater shells, yet some contained small perforations, a few millimetres wide, that were made with a sharp object. This suggested that someone had used a tool such as a shark tooth to crack open the shell — like using an oyster knife, says Joordens.

"A visiting colleague photographed the shells and later noticed a faint zigzag pattern on one. 'People never found this engraving because it's hardly visible,' says Joordens. 'It's only when you have light from a certain angle that it stands out.'

"Close inspection under the microscope suggested that the engraving was intentional. The weathering patterns of the grooves, each of which is about 1 centimetre long, show signs of significant ageing, and there are no gaps between turns, indicating that the maker paid attention to detail. He or she probably made the engraving on a fresh shell, and the newly made etching would have resembled white lines on a dark canvas, Joordens’ team notes. Sand grains still embedded in the shell were dated to around 500,000 years ago.

" 'We've looked at all possibilities, but in the end we are really certain that this must have been made by an agent who did a very deliberate action with a very sharp implement,' says Joordens. Her team tried replicating the pattern on fresh and fossilized shells, 'and that made us realize how difficult it really was,' she says" (http://www.nature.com/news/homo-erectus-made-world-s-oldest-doodle-500-000-years-ago-1.16477, accessed 12-14-2014).