Thomas explains here that this is the first book printed on wove paper rather than laid paper in the United States. 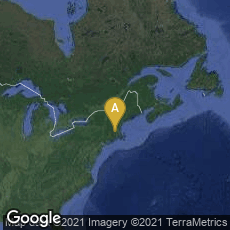 Thomas appears to have printed the engravings in this volume on paper of inferior or he may have used acidic ink. In any case each of the images in my copy has browned and offset onto the facing page.

In 1795 American printer and printing historian Isaiah Thomas of Worcester, Massachusetts, issued the first American book printed on wove rather than laid paper. It was a duo-decimo volume of poems by the English poetess and novelist Charlotte Smith entitled Elegiac Sonnets and Other Poems. The First Worcester Edition, from the Sixth London Edition, with Additions. In January 2015 I was able to obtain a copy for my collection, and to examine the quality of the paper first hand. It is quite good; the paper on which the plates were printed is significantly inferior with the result that the plates are browned while the text remains clean.

On p. xiii Thomas included an unusual "Advertisement" in which he discussed features of the copperplate engravings and the paper used in the edition, which Thomas seems to say that he manufactured himself. The reference to the "Columbian press" in Thomas's last paragraph would apply to printing in Columbia as a poetic name for America rather than the famous Columbian Press invented by George Clymber in 1813.

"The Editor of this (Worcester) Edition, intended to have published it nearly four years since, at which time he had the plates engraved in his Office in this town. His being employed in printing alrger and heavier volumes has prevented these Sonnets appearing from his Press til now,—As the Letter Press has been delayed, he could have wished the Engravings had been also ; as in the fancy of engraving in this country, four years' additional experience to the artist would doubless have produced more delicate work than what is now presented. The lovers of this Art, will, however, be enabled, in some measure, to mark the progress of Engraving by a comparison of the Plates now executed with these, and the Editor doubts not but a proper allowance will be made for work engraved by an artist who obtained his knowledge in this country, by whom these plates were executed, and that done by European engravers who have settled in the United States.

"The making of the particular kind of paper on which these Sonnets are printed, is a new business in America; but lately introduced into Greatbritain; it is the first manufactured by the Editor.

"On the whole, the Editor hopes for the candor of those who wish well to the productions of the Columbian Press--their favorable acceptance of this, and other volume sprinted in this country, will doubtless raise an emulation to produce others, better executed, on superior paper, and with more delciate engravings.

Hunter, Papermaking: The History and Technique of an Ancient Craft (1947) 519.