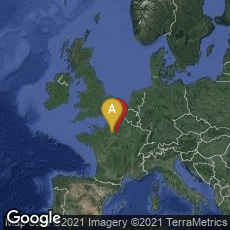 By 1811 at least two inventors in France after Robert were attempting to mechanize the papermaking process. One was Ferdinand Leistenschneider of Dijon, who obtained some brevets or patents for his inventions. At Dijon in 1815 Leschevin and Antoine published a small pamphlet of 32 pages on Leistenscheider's attempts at making papermaking machines. Their pamphlet, Rapports lus a l'Académie des sciences, arts et belles-lettres, de Dijon, dans ses séances particulières des 3 juillet 1811 et 19 mai 1813, sur les machines à fabriquer le papier, inventées par le sieur Ferinand Leistenschneider,  fabricant de formes à papier..., appears to have been printed on hand-made rather than machine-made paper, probably because Leistenscheider's machine was not truly operational. It is probable that this pamphlet is the first separately issued publication on papermaking by machine in France, and one of the very earliest published anywhere.

"In 1827 there were four paper-machines in France. In 1833 the number exceeded twelve, according to Proteaux. For the most part these machines were built in England" (Hunter, Papermaking: the History and Technique of an Ancient Craft [1947] 536).

Antoine-François Berte, who developed the first operational papermaking machine in France, obtained Brevet No. 1455 for the machine on 11 Octobre 1811. Berte's patent was far more detailed and more advanced than the original Robert patent. In 2017 I was able to acquire a volume once in the library of the Val Cognatrix (Saint-Germain-lès Corbeil) chateaux of the papermaker Paul Darblay, who in 1860 bought the Essonnes paper mills, originally owned by Saint-Léger Didot. It was at this location that Louis-Nicolas Robert invented the first papermaking machine. This volume contains four very scarce pamphlets recording in great detail all the nuances of the patent dispute between Didot and Berte over rights to the papermaking machine in France. These pamphlets were all issued for private circulation:

Though these documents provide some documentation regarding the earliest history of machine papermaking in France, the titles of the first publications in France printed on machine-made paper appear to be unknown, except that André (p. 89) mentions that from August 1816 Berte began supplying machine-made paper for the production of the Journal des débats.