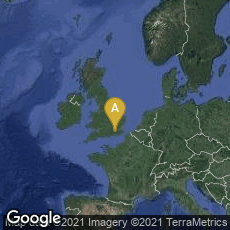 "In the Summer of 2012, Silvia Hartmann accepted the challenge to write a 'kick ass' fantasy-fiction novel live online on Google Drive as 'The Naked Writer,' trusting in her personal daemon to deliver not just the story, but the order and sequence of the words. Thousands of readers from around the world watched each letter appear on the screen in real time. The Dragon Lords was started on September 12th 2012 and, on November 11th 2012, the last chapter was written live in front of an audience of 150 delegates at the AMT Conference, Gatwick, England."

On December 17, 2012 Robert McCrum reviewed the work in theguardian.com, from which I quote:

"It worked like this. Hartmann's daily 90-minute composition sessions were overseen by hundreds of followers, who could put forward their ideas and influence the plot. Comments were added to the manuscript in real time, with Hartmann responding to them.

"Participants from the UK, US, Brazil, Malaysia, Russia, Australia and New Zealand took part in the project. Their input ranged from critiquing plotlines to actually naming the book. That bit of the process is probably a gimmick. At the end of the day, it's still Hartmann's novel. Indeed, one suspects that the "cloud-sourcing" element is really a new kind of global publicity under another name. I'm not sure that a serious writer, committed to self-expression, would want anything to do with this kind of collaboration. But I digress.

"Dragon Lords was completed between September and November, 2012, which is quick work, but not unseemly. Many famous novels have been written as fast as that. Faulkner famously wrote As I Lay Dying in just over a month. Georges Simenon routinely used to write a police "procedural" in a week.

"However, the making of Dragon Lords is unlike almost any previous English-language novel. More than thirteen thousand people are said to have "interacted" with the title. This is a step-change. (Many books would be grateful to have 1300 readers, let alone 13,000.)

"What's more, in this new world of creativity, all of them were hosted on Google Docs, a word processing tool that promotes and celebrates this kind of collaboration. No surprise, then, that Google is now actively puffing Dragon Lords, mostly as a new-book phenomenon. Everyone involved is being rather coy about its actual literary merit. And indeed, Alison Flood was not convinced by the work in progress. In truth, Dragon Lords is more significant as a technological, rather than a creative, feat."

The novel was issued in both electronic and print.