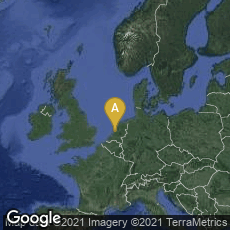 First issue of the Courante, printed on the recto of a single sheet without an imprint or date.

The first newspaper published in broadsheet format was Courante uyt Italien, Duytslandt, &c., the first Dutch newspaper. It was published in Amsterdam beginning in June 1618 as a regular weekly publication in a single folio broadsheet format. Before this news periodicals were issued as newsbooks— pamphlets in quarto format.

The first issue of the Courante, printed on the recto of a single sheet, includes no imprint identifying the printer or publisher; it is also undated. The imprint appeared in 1619, and the date and practice of printing on both sides of the sheet began in 1620. The exact date of the first edition of the Courante is not known, but the dates of the news items suggest that it was probably printed between June 14 and 18, 1618. Comparison with similar newspapers published later suggests that it may have been printed by Joris Veseler and edited and published by Caspar van Hilten.

"The first issue presented news from four sources, including Venice, Cologne and Prague. This corresponds with the name of the newspaper, which in English means "Current events from Italy, Germany, etc". The main text runs in two columns. The columns are separated with a gutter and a line running in it. There are no empty lines within the body text. The body of the text is printed in Dutch black-letter, except for the numbers. Roman type is used for datelines which also act as headlines for the news items. The text is fully justified and the beginnings of paragraphs are identified with indents approximately the size of the line-height.

"The only surviving copy of the first issue is in Sweden's Kungliga Biblioteket in Stockholm. Later issues from 1628 to 1664 can be found at the Koninklijke Bibliotheek in The Hague" (Wikipedia article on Courante uyt Italien, Duytslandt, &c., accessed 01-17-2015).

In January 2015 digital facsimiles of the Courante published between 1618 and 1670 were available from the Koninklijke Bibliotheek through The European Library portal at this link.