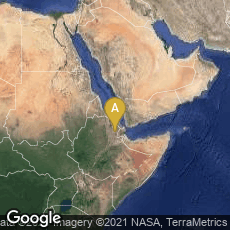 Formerly the Earliest Known Remains of the Genus Homo On March 4, 2015 it was announced that a lower jaw bone and five teeth discovered on a hillside site called Ledi-Geraru, Afar Regional State, Ethiopia, about 250 miles from Addis Ababa, dated from about 2.8 million years before the present, making it the oldest known remains of the genus Homo, the lineage that eventually led to modern humans.

From an article by Ian Sample published in The Guardian on March 5:

"The new fossil, found at a site called Ledi-Geraru, has a handful of primitive features in common with an ancient forerunner of modern humans calledAustralopithecus afarensis. The most well-known specimen, the 3m-year-old Lucy, was unearthed in 1974 in Hadar, only 40 miles from the Ledi-Geraru site. But the latest fossil has more modern traits too. Some are seen only on the Homo lineage, such as a shallower chin bone.

"The picture that emerges from the fossil record is that 3m years ago, the ape-likeAustralopithecus afarensis died out and was superseded by two very different human forms. One, called Paranthropus, had a small brain, large teeth and strong jaw muscles for chewing its food. The other was the Homo lineage, which found itself with much larger brains, a solution that turned out to be more successful.

“ 'By finding this jaw bone we’ve figured out where that trajectory started,' said Villamoare. 'This is the first Homo. It marks in all likelihood a major adaptive transition.;

"What drove Australopithethus to extinction and led to the rise of Homo is a mystery, but researchers suspect a dramatic change in the environment transformed the landscape of eastern Africa. 'It could be that there was some sort of ecological shift and humans had to evolve or go extinct,' said Villmoare.

"Other fossils recovered nearby the new human remains suggest that the region was much wetter than Hadar where Lucy was found. Remnants of antelopes, prehistoric elephants, primitive hippos, crocodiles and fish were all recovered from the Ledi-Geraru site, researchers said. Details of the discoveries are reported in two papers published in Science.

"The human jaw was discovered in January 2013 by Chalachew Seyoum, an Ethiopian national on the team, and a student at Arizona State University. He was part of a group that had set off from camp that morning to look for fossils on a hill that was later found to be brimming with ancient bones."