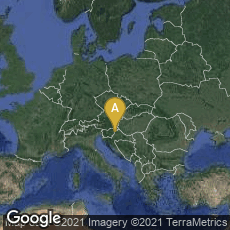 Three cut marks are preserved on the lateral surface: (a) a short superior cut mark; (b) a long cut mark interrupted by the foramen; (c) a short inferior mark. Edges of most cut marks are not sharp. An abraded area (d) occurs near the proximal edge of the joint.

On March 11, 2015 anthropologist Davorka Radovcic, a curator at the Croatian Natural History Museum in Zagreb, and colleagues published research indicating the production of the world's earliest jewelry from eagle talons by Neanderthals about 130,000 years ago, long before modern humans appeared in Europe. The evidence came from eagle bones discovered at the Krapina site where in 1899 archaeologist and paleontologist Dragutin Gorjanović-Kramberger found over eight hundred fossil remains belonging to Neanderthals on a hill called Hušnjakovo.

This video was produced without sound:

"ABSTRACT: We describe eight, mostly complete white-tailed eagle (Haliaëtus [Haliaeetus] albicilla) talons from the Krapina Neandertal site in present-day Croatia, dating to approximately 130 kyrs ago. Four talons bear multiple, edge-smoothed cut marks; eight show polishing facets and/or abrasion. Three of the largest talons have small notches at roughly the same place along the plantar surface, interrupting the proximal margin of the talon blade. These features suggest they were part of a jewelry assemblage, --- the manipulations a consequence of mounting the talons in a necklace or bracelet. An associated phalanx articulates with one of the talons and has numerous cut marks, some of which are smoothed. These white-tailed eagle bones, discovered more than 100 years ago, all derive from a single level at Krapina and represent more talons than found in the entire European Mousterian period. Presence of eight talons indicates that the Krapina Neandertals acquired and curated eagle talons for some kind of symbolic purpose. Some have argued that Neandertals lacked symbolic ability or copied this behavior from modern humans. These remains clearly show that the Krapina Neandertals made jewelry well before the appearance of modern humans in Europe, extending ornament production and symbolic activity early into the European Mousterian."