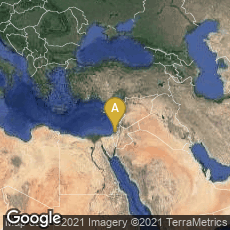 Elephant rib with cut marks in association with flint items (including handaxe) excavated in Revadim, Israel.

On March 18, 2015 archaeologist Ran Barkai of Tel Aviv University and colleagues reported that analysis of 500,000-year-old hand axes and scrapers at a Lower Paleolithic site at a quarry in Revadim, Israel, bore fat residue from processing contemporaneous elephant remains also found at the site, and that an elephant rib with clear cut marks was also found at the site indicating that people living there during the Lower Paleolithic era at big game. The research represents the first scientifically verified direct evidence for the precise use of Paleolithic stone tools: to process animal carcasses and hides.

"The archaeological record indicates that elephants must have played a significant role in early human diet and culture during Palaeolithic times in the Old World. However, the nature of interactions between early humans and elephants is still under discussion. Elephant remains are found in Palaeolithic sites, both open-air and cave sites, in Europe, Asia, the Levant, and Africa. In some cases elephant and mammoth remains indicate evidence for butchering and marrow extraction performed by humans. Revadim Quarry (Israel) is a Late Acheulian site where elephant remains were found in association with characteristic Lower Palaeolithic flint tools. In this paper we present results regarding the use of Palaeolithic tools in processing animal carcasses and rare identification of fat residue preserved on Lower Palaeolithic tools. Our results shed new light on the use of Palaeolithic stone tools and provide, for the first time, direct evidence (residue) of animal exploitation through the use of an Acheulian biface and a scraper. The association of an elephant rib bearing cut marks with these tools may reinforce the view suggesting the use of Palaeolithic stone tools in the consumption of large game."

"There are three parts to this puzzle: the expansion of the human brain, the shift to meat consumption, and the ability to develop sophisticated technology to meet the new biological demands. The invention of stone technology was a major breakthrough in human evolution," Prof. Barkai said. "Fracturing rocks in order to butcher and cut animal meat represents a key biological and cultural milestone.

"At the Revadim quarry, a wonderfully preserved site a half-million years old, we found butchered animal remains, including an elephant rib bone which had been neatly cut by a stone tool, alongside flint handaxes and scrapers still retaining animal fat. It became clear from further analyses that butchering and carcass processing indeed took place at this site."

Through use-wear analysis -- examining the surfaces and edges of the tools to determine their function -- and the Fourier Transform InfraRed (FTIR) residue analysis which harnesses infrared to identify signatures of prehistoric organic compounds, the researchers were able to demonstrate for the first time direct proof of animal exploitation by flint tools.

"Archaeologists have until now only been able to suggest scenarios about the use and function of such tools. We don't have a time machine," Prof. Barkai said. "It makes sense that these tools would be used to break down carcasses, but until evidence was uncovered to prove this, it remained just a theory" (http://www.sciencedaily.com/releases/2015/03/150319150753.htm,  accessed, 04-01-2015).