Portrait of Étienne Charles de Loménie de Brienne, circa 1770-1794. From the collection of the Institut de France deposited at the Palace of Versailles. 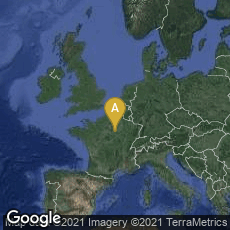 Loménie de Brienne owned 1,332 incunabula, including 4 block books, 2 copies (both on paper) of the Gutenberg Bible, the 1459 Fust & Schöffer Psalter, and a copy of the first Durandus, the last two of which were on vellum. Besides his career in the church, Loménie de Brienne became finance minister to Louis XVI, and was instrumental in the downfall of the ancien régime by his attempts to find accomodation to the French Revolution. Financial reverses caused by the revolution forced him to sell his collection, and the catalogue states that the collection was to be sold en bloc, but if no buyer could be found after 6 months, the collection would be dispersed at auction. The sale occurred in Paris in March 1792, and owing to the political disruption that impacted all French libraries at the time, the results must have been mixed. Loménie was arrested at Sens on 9 November 1793, and died in prison in 1784, either of an apoplectic stroke or by poison.

(This entry was written in the Mediterranean near Crete on the Oceania Riviera on 06-10-2015.)

Printing by Handpress or by Hand
Bibliography