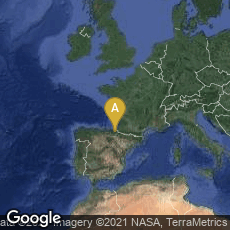 The Oldest Map is Discovered in Abauntz Cave, Navarre, Spain In August 2009 archaeologists reported that a stone found in Abauntz Cave, Araitz, Navarre, northern Spain contains the earliest known map. Engravings on the stone, which measures less than seven inches by five inches, and is less than an inch thick, appear to depict mountains, meandering rivers and areas of good foraging and hunting. A team from the University of Zaragoza spent 15 years deciphering the etched lines and squiggles after unearthing the artefact during excavation of the cave in 1993." The paper, by P. Utrilla, C. Mazo, M.C. Sopen, M. Martínez-Bea, and R. Domingo, published in the Journal of Human Evolution, 57 (2009) 99-111 was entitled "A palaeolithic map from 13,660 calBP: engraved stone blocks from the Late Magdalenian in Abauntz Cave (Navarra, Spain)."

Its Abstract read as follows:

"An engraved block from the cave of Abauntz is interpreted as a Magdalenian map in which the actual surrounding landscape, including mountains, rivers, and ponds, is represented. Some possible routes or avenues of access to different parts of the geography are also engraved on the landscape. The engraving seems to reproduce the meandering course of a river crossing the upper part of side A of the block, joined by two tributaries near two mountains. One of these is identical to the mountain that can be seen from the cave, with herds of ibex depicted on its hillsides, on both sides of the gorge in front of which the cave of Abauntz is strategically located. In the southern part of the gorge, there is a completely flat area where the watercourses slow down, forming meanders and flooding in springtime. The following elements are also represented on the block: tangles of concentric strokes and bundles of lines forming very marked meanders. In short, all of these engravings could be a sketch or a simple map of the area around the cave. It could represent the plan for a coming hunt or perhaps a narrative story of one that had already happened. This paper is provided in the context of recent discussions on early modern human capacities of spatial awareness, planning, and organized hunting."